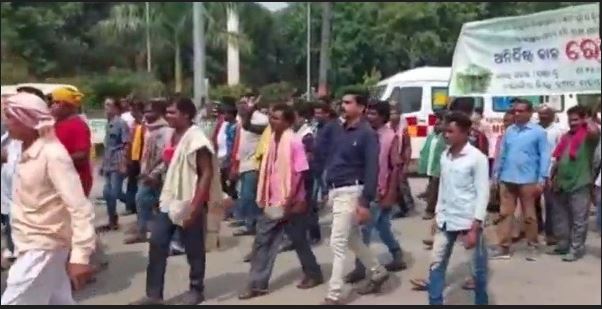 Balangir: A large number of farmers staged a demonstration at various railway stations and blocked tracks in Odisha’s Balangir district on Monday, demanding immediate steps to ensure payment of their crop insurance money.

Hundreds of farmers from 14 blocks of the western Odisha district staged protests at Balangir, Titlagarh and Harishankar stations alleging delay in payment of crop insurance money.

Railway Protection Force (RPF) and Odisha police personnel were deployed at the railway stations in the district to prevent any untoward incident during the protest by farmers, who plan to continue the stir for an indefinite period.

Claiming that their demands were ignored by the administration for the last several months, the farmers’ union threatened to intensify their agitation if the government fails to take immediate steps for payment of crop insurance money.

In the past, the farmers had organised several agitations and staged road blockades and demonstrations but their pleas went unheeded, they claimed.

It was further alleged that the insurance company had deleted the names of many farmers from the list of beneficiaries in a fraudulent manner.

At This Durga Puja Pandal In Bhubaneswar, Take A ‘Tour Of Akshardham Temple’ [Watch]