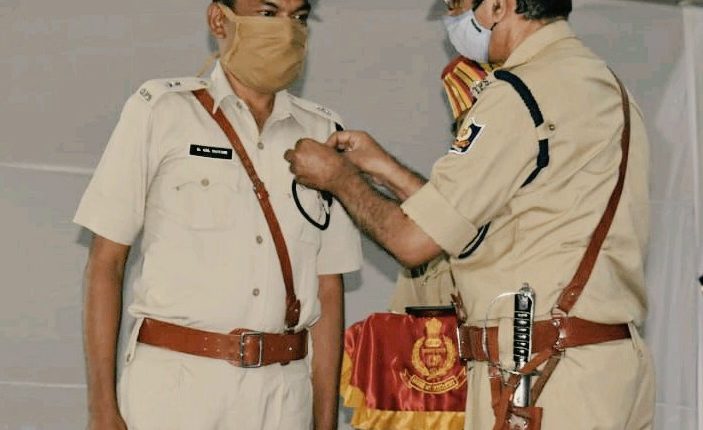 Malkangiri: Odisha DGP Abhay on Sunday felicitated 30 police officials for their contributions towards the safety of people in Maoist-dominated Malkangiri district. Abhay presented DGP’s disc and commendation letters to police personnel on the occasion.

This is for the first time that the DGP organised a medal investiture ceremony in Malkangiri to honour the brave police personnel for their excellent work in challenging areas like Malkangiri to motivate them further.

The DGP said also said the special investiture ceremony is being held in Kandhamal, Koraput and Malkangiri to boost the morale of forces serving in the far-off regions and battling Maoists.

Among the awardees are Malkangiri SP Rishikesh Dnyandeo Khilari who received a medal from the DGP.

The 30 awardees include one IPS, one OPS, three Sis, two Havildars and 23 Jawans of District Police and OAPF.

One of the awardees, officer-in-charge at Papermetla police station and Malkangiri SI, Laxmi Narayan Muduli received the award for development of Chitrakonda Swabhiman Anchal. He was deployed for the safety during construction of Gurupriya Setu and road of Chitrokonda.

Muduli has earlier taken SOG training. He was also successful in anti-Maoist operations on several occasions. He also played the main role in setting up of seven BSF camps there.

DGP Abhay also spent time with the family members of the awardees.

The DGP was accompanied by ADG Lalit Das; IG, Operations, Amitabh Thakur and DIG Anirudh Singh, among others.

Rampant Poaching A Big Threat To Tiger Population In Odisha