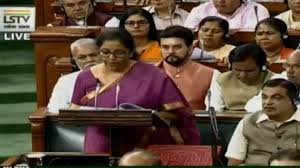 Finance Minister Nirmala Sitharaman on Friday unveiled a Union Budget aimed at boosting infrastructure in several sectors, the first since the Narendra Modi government returned for a second term in power, Reuters reported.

Here are the highlights of the Union Budget for the 2019/20 fiscal year beginning April 1:

# India to invest heavily in infrastructure and job creation.

# The government will carry out a restructuring of highway building. programme to ensure enough capacity is created.

# India will enter into aircraft financing and leasing activities.