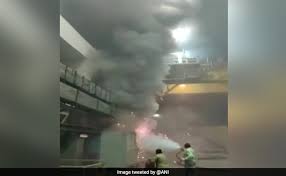 Telangana: All nine trapped Telangana State Power Generation Corporation Limited (TSGenco) engineers were killed in a  massive fire which swept through the Srisailam hydroelectric plant in the early hours of Friday.

The bodies of six were earlier in the day recovered from an underground unit. The other three also didn’t survive.

There were 30 employees of TSGenco inside the plant when the fire broke out past midnight on Thursday. Fifteen of them managed to come out through the emergency exit route, while six were rescued and brought out of the tunnel.

CID’s additional director of police Govind Singh has been appointed as the inquiry officer. He has been asked to submit a report at the earliest.

Expressing his condolence to the bereaved families, the chief minister rued that despite all efforts being made to rescue the trapped engineers, it went in vain.

Distressed by the loss of lives in a fire incident at Srisailam hydroelectric plant in Telangana. My thoughts are with the bereaved families.

Telangana’s Power minister G Jagadeeshwar Reddy told reporters that the possible cause of the fire was a short circuit in the electric panels of the power house.

The nine people who were trapped inside lost their lives due to the thick smoke which engulfed the tunnel, making rescue efforts difficult.

The rescued employees were shifted to TSGenco Hospital at Eegala Penta, close to the power house. They were learnt to be out of danger.

The plant is located on the Telangana side of the Srisailam reservoir on the Krishna River, a joint irrigation project under Telangana and Andhra Pradesh. The power house was constructed in the huge tunnel under the Nallamala forests adjacent to the reservoir.