From Mass Movement Of Princely States To Rukuna Rath Yatra, Odisha Tableaus That Rolled On Rajpath 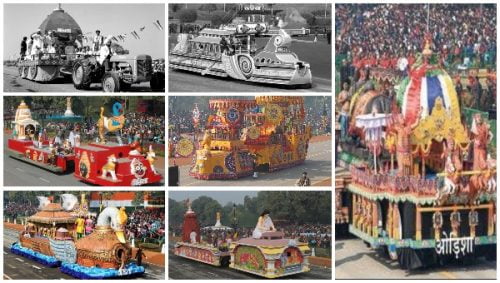 Bhubaneswar: There were a few cries of protest when Odisha’s tableau for Republic Day celebrations was rejected by the Union Defence Ministry for a second consecutive year.

This year’s tableau was themed around the Paika Rebellion of 1817 and it made it to the third round but not to the Rajpath on 73th Republic Day on Wednesday.

Odisha’s culture and heritage were last on display at the 71st Republic Day parade in New Delhi with a tableau on Rukuna Rath Yatra of Lingaraj Temple, which won the second prize. It included a replica of the Lingaraj temple, Nandi (the bull) and the Rukuna Rath. Odissi artistes had also accompanied the tableau.

This came two years after Dola Yatra, one of the most celebrated festivals of Odisha observed during the Hindu month of Falguna, was showcased in 2017.

The other tableau from the state which made the cut were based on the themes of Boita Bandana (2016), Chandan Jatra (2013) and Gita Govinda and Jayadev (2011).

But did you that Odisha had made its debut in the Republic Day Parade at Rajpath in 1952.

A tableau representing the mass movement of princely states was showcased in 1973 while Bali Jatra was the theme in 1985.

The state had won the first prize for its colourful and vibrant tableau in 2007.

Here are some other tableaus from Odisha that moved along the Rajpath.
Share FacebookTwitterGoogle+ReddItWhatsAppPinterestEmail

Janhvi Prepares For ‘Mr And Mrs Mahi’; Check Which India Cricketer Is Training Her