Gandhi: No Longer A Mahatma? 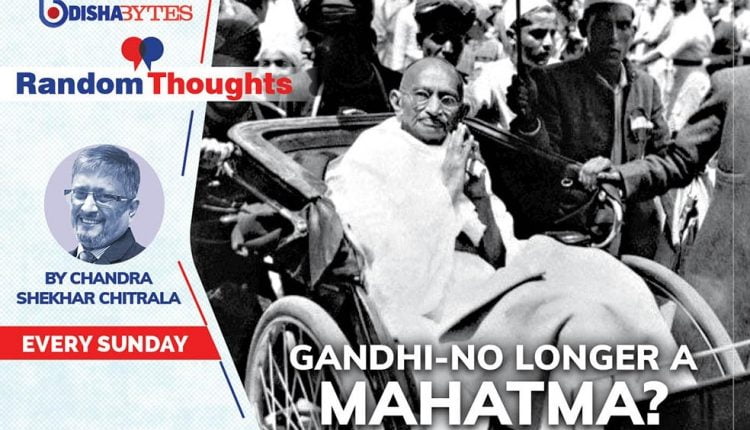 Thirtieth of January is marked as Shaheed Divas, or Martyr’s Day in India, the reason being that this was the day Mahatma Gandhi was assassinated.

A child in the seventies and a youth in the eighties, I grew up with the fact that Gandhi was a Mahatma – a great soul. Initially I accepted it as something that was true because it was told to me by teachers, parents and society at large.

Later on, as I read his works and was able to appreciate his perspective on the myriad issues that he confronted, as well as his strength and resolve in handling them, this belief was reinforced.

As I grew older, I was exposed to his shortcomings and his very human frailties as well, but somehow, instead of bringing him down, my esteem for him grew. For he was not some super human who was always right and always knew exactly what needed to be done, but a human being like the rest of us, who nevertheless managed to achieve impossible goals.

Today, he is acclaimed the world over for his policies of non-violence and satyagraha as a means of protest. But back in the day, he could not have known the effect these methods would have – just a firm belief that this was the right way to go about it. And the courage – both physical and moral, to follow through on his beliefs.

It is very easy for us today, with the benefit of 20-20 hindsight, to think that this was something that was natural and obvious, but it was not so. Our natural, instinctual reaction to injustice and violence is to respond in kind, with violence – or, to flee. This is the fight or flight reaction, the survival instinct, has been a part of us for thousands of years, and is tremendously difficult to resist. That he was not only able to subdue it in himself, but was able to get millions of his fellow citizens to do the same is nothing short of a miracle.

He also understood that political independence would be meaningless for the vast majority of our countrymen without economic independence. Which is why, he intertwined both by making them a single battle – be it the Dandi march for the right to make salt or the Champaran movement for indigo farmers. His promotion of homespun khadi was as much a fight against the cheap fabric from Manchester as an employment and income generation opportunity for poor weavers.

Gandhi also understood that whichever way we define a nation, there will always be differences between its inhabitants. Be it political, religious, sectarian, caste, economical or in any other such dimension, these differences had the potential to tear the nation apart. And the only way to bring together a diverse population as it is in India, was to embrace complete inclusivity. Where all other identifiers are cast away and every citizen is treated with equal respect.

But while he was successful in bringing about a behavioural change in subduing the fight or flight response, for whatever reasons, he was unsuccessful in making quite a large number of our citizens understand the need for inclusivity. This failure is what provoked Jinnah to propose and implement his two-nation theory, for he probably foresaw a day when the majority would seek to curb the rights of the minorities.

For many like me from my generation, seeing the portrayal of Gandhi as a villain and the glorification of those dishonouring his memory, while at the same time claiming to honour and respect him as the Father of the Nation, highlights the cognitive dissonance that is present in our society today, and is deeply disturbing.

What is more distressing is the number of people who apparently hold the view that his assasination was justified and his assassin is the true hero, for this appears to go against everything that we have grown up holding as sacred – Truth, Non-Violence, Dignity of Labour, Equality, Respect for all Religions and Individuals…

There is another aspect of this too – recognition of the cognitive dissonance that the supporters of Nathuram Godse’s views must have experienced all these years, as he was being reviled as the killer of the nation’s Bapu. It has taken seventy four years, but at last, now they would be finding relief.

As a nation, we are at a crucial crossroad where we need to choose which way to go. And this decision will have far-reaching consequences, not just for us, but for our future generations.