Given Up For Dead, Odisha’s ‘Missing Man’ Found In Kolkata After 55 Years 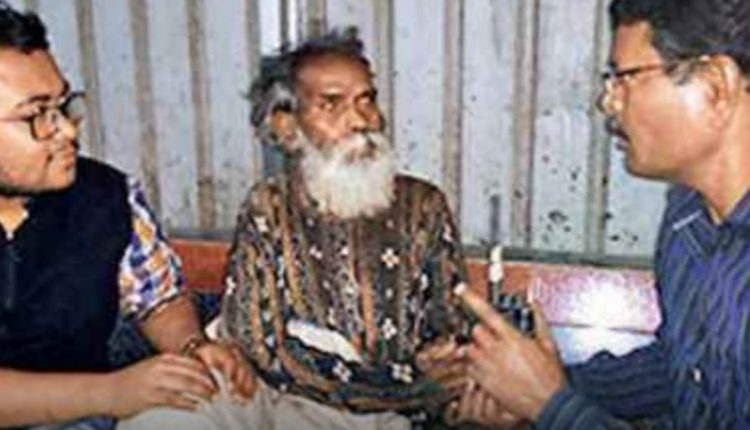 Kolkata: Charu Basor left his home as a youth but returned as a 75 year old man. In a surreal ‘lost and found’ story, Charu Basor of Brajrajnagar in Odisha’s Jharsuguda, who was given up for dead returned home after 55 years. He was found on a railway station here.

Charu was 20 when he went missing from his village. Fifteen years after his family failed to find him, the local authorities declared him dead and even issued a death certificate. All this while, Charu was living at the Sodepur railway station in North 24 Parganas.

He spent more than 50 years on the station hoping that someone from his family would come to take him home. That was not to be. Not in a stable mental condition, he himself had no recollection of where he came from.

Someone did come more than 50 years later but not from his family. “We found Charu on a bench at Sodepur station about four months ago while distributing mosquito nets and transistor radio sets among people living on the streets,” said Hiralal Sinha, vice-president, West Bengal Radio Club (WBRC) to a leading English newspaper. “On being asked, he said his home used to be near a paper mill and there was a playground nearby.”

“He appeared to be suffering from a mental ailment. We decided to try and locate his family and spoke to him nearly every day. Finally, we came to know that he had a brother and sister when he left home.”

From the way he spoke, Sinha and his team could make out that Charu was from Odisha. So WBRC got in touch with Dusm Kumar Das, an amateur radio operator from Odisha and requested him to try and search for a possible location. Das began a search near paper mills, both functional and closed till he came across one in Jharsuguda, that had a playground and a pucca road nearby.

“Das went around asking people if they knew Charu Basor and somebody pointed to their house,” said Ambarish Nag Biswas the WBRC secretary to the newspaper. “He found a woman and her sons there. She was Ruma, Charu’s elder sister. She is very old and doesn’t have a very good memory. Her sons said they don’t know of any Charu Basor but spoke of one Ayodhya Basor, their maternal uncle.”

A search for Ayodhya started and it was finally found that he now went by the name Ajay Basor. He said Charu had left home when he was barely 21-22 years old, when his family was searching for a match for him. A police complaint was lodged, but Charu could never be traced.

Ayodhya also told Das that he and his sister needed succession certificates after their parents passed away, for which they required a death certificate. In accordance with the law, Ruma and Ayodhya then split the property, not realising that Charu was alive.

“We received a request from WBRC and were amazed at the kind of effort they put in to track down the old man’s family,” says a senior police from Jharsuguda.

“We got him identified by his brother. The two even spoke to each other, bringing up old memories. We paid for tickets for Ayodhya’s travel to Kolkata. A police team also accompanied him to take care of any complications. He is about 75-76 years old and has suffered a lot over the years. At least he can spend his last days in peace with relatives. We shall ensure he is accepted by his family.”