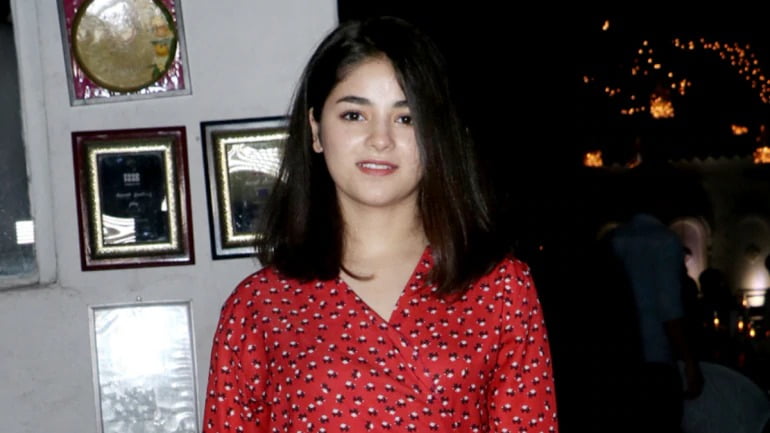 New Delhi: Actress Zaira Wasim denied through a tweet on Monday that her social media accounts were hacked, reports NDTV.

Zaira, 18, had faced severe backlash after announcing in a lengthy note she posted on her social media accounts on Saturday that she was ending her acting career because the Bollywood environment had “damaged my peace, imaan and my relationship with Allah.”

While some said her choice must be respected, others criticised her as being regressive. “Doesn’t matter if two-film olds are ungrateful to the industry that have given them all. Just wish they’d exit gracefully and keep their regressive views to themselves,” tweeted actress Raveena Tandon.

In another tweet, responding to AltNews founder Pratik Sinha, Raveena wrote: “Exit is your choice, reason, by all means. Just do not demean it for everyone else.” Raveena Tandon also described the film industry as “one where all work shoulder to shoulder, no difference in caste and religion.”

Raveena posted a third tweet, also in response to another’s, saying she respected Zaira’s decision but that it would have been “more graceful if she hadn’t condemned all as the reason for doing so.”

Journalist Aarti Tikoo Singh tweeted saying: “Why couldn’t Zaira Wasim quit Bollywood quietly? Why did she have to paint acting as a path of ignorance, sin & anti-religion? In her personal choice/decision & public self-righteousness, she stigmatized all actors. No different from Islamist extremists who call art haram.”.

On Monday, NewsX quoted Zaira’s manager as saying that the actress’ social media accounts had been hacked and that she hadn’t written the pages-long announcement.

But Zaira dismissed the reports, tweeting: “This to clarify that none of my social media accounts were or are hacked and are being handled by me personally. Kindly refrain from believing or sharing claims that state otherwise! Thanks.”

Speaking to ANI earlier in the day, the actress’ manager Tuhin Mishra claimed he never said the reported statements and that the post was written by Zaira Wasim. “We have never said that her account was hacked. We just said that we would definitely like to know what has happened. And the post was done by her,” said Zaira Wasim’s manager Tuhin Mishra. The posts – shared on Twitter, Instagram and Facebook – are still live.

Twitter wasn’t buying the hacking story. Omar Abdullah, who was among the first to tweet saying Zaira Wasim’s choice should be respected, tweeted saying: “The dog ate my homework grows up to become my social media accounts were hacked.”

Zaira has two acclaimed films to her credit – Dangal and Secret Superstar, both made by Aamir Khan – and a third – The Sky Is Pink opposite Priyanka Chopra and Farhan Akhtar – on the way.