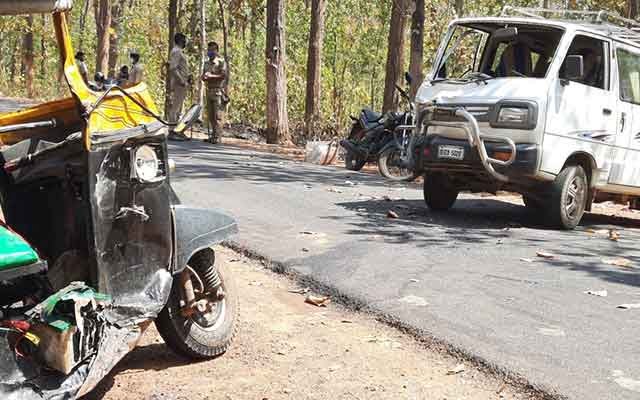 Baripada: Five persons sustained severe burn injuries as a twister coming from the burning reserve forest hit them in Thakurmunda area of Mayurbhanj district on Sunday.

According to sources, four persons were on the way to Thakurmunda in an auto-rickshaw on the state highway alongside the reserve forest when a twister hit the area. As the twister moved from the forest to the highway, a cloud of thick smoke enveloped the area.

While the auto-rickshaw driver blinded by the smoke was unable to drive, a car coming from the opposite direction hit the vehicle throwing the four passengers and the driver to the road near Jualikata Chhak.

As the twister carrying the burning firewood passed over them, all the five persons sustained burn injuries.

Following information, the locals rushed to the spot and admitted the injured in the Community Health Centre (CHC) at Thakurmunda.

The locals told the media that the bush fire has been spreading in the reserve forest for the last one week. With the Forest personnel unable to bring the fire under control, it is now spreading towards the Similipal National Park, they added.