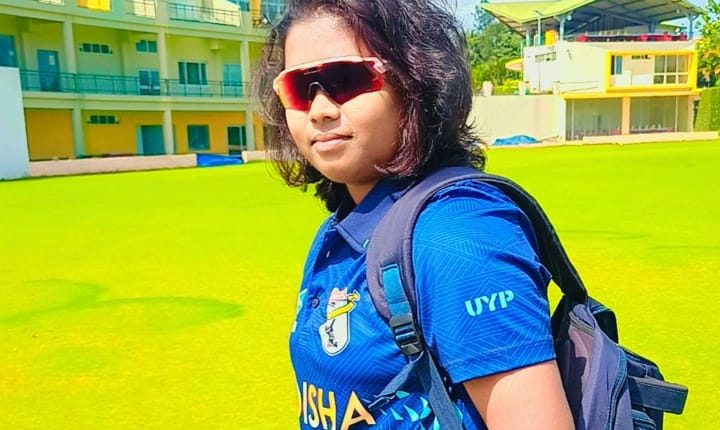 Angul: Gayatri Behera couldn’t fulfil her ambition of playing cricket for her Odisha and India. But the various obstacles she faced couldn’t deter her from remaining involved with the game. And now, she is the Technical Analyst of the Odisha women’s cricket team.

Daughter of Hemant and Jharpani Behera of Ugi Malisahi village in Angul district, Gayatri grew up watching her brother and other kids of her age-group playing cricket at the village field.

That instilled in her a deep interest in cricket, and as she grew up, she joined the boys on the cricket pitch. She received full support from her family, who never tried to dissuade her by giving any stereotypical advice like girls don’t play cricket, etc.

Seeing her interest in the game, Gayatri’s brother arranged for her to take training in cricket. But Gayatri had to travel about 30 km from her village to Angul city to play cricket. At times, she did not even have the money to pay bus fare.

But she persevered, and was finally selected for a district-level match. She performed well, but couldn’t continue playing too long.

She may have failed to realize her own dream of playing for her state and country, but thanks to her persistent desire and determination, Gayatri is now in a position to play a crucial role in making other budding cricketers’ dreams come true by showing them the way.

She is enjoying the role of Cricket Technical Analyst of the state team and managing her responsibilities efficiently.

“I had dreamt of becoming a cricketer since childhood and to play for my state as well as for India. Due to some unavoidable problems in life, I could not get to that point in my career where I had planned it to be. Nevertheless, I had to do something in this field only,” said Gayatri.