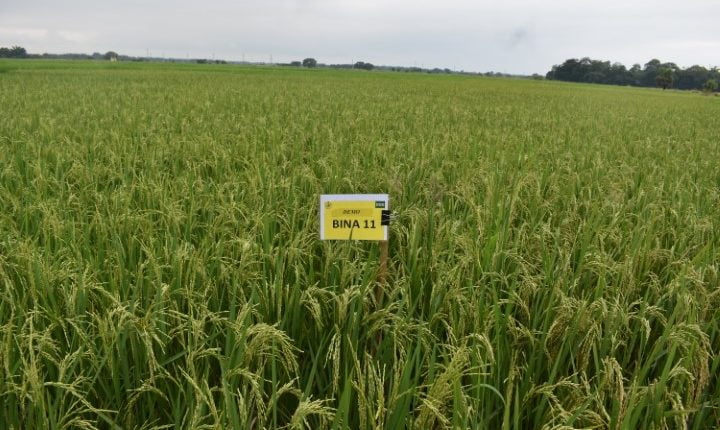 Rice, the most important food crop in Odisha, is mainly grown during the rainy season in about 3.5 million hectares. It is mainly a rain-fed crop as only 35% rice area is irrigated. Drought, flood or both affect rice productivity. At 1.7 tons/ha, the average yield is significantly less than other states like Punjab, Haryana, AP, Tamil Nadu and is below the national average of 2.58 tons/ha (Agriculture outlook, 2017).

The shallow lowlands that constitute 37% of the total rice area in Odisha continue to be cultivated with rice varieties like Lalat, Naveen, MTU 1001 and MTU 1010 which were developed 20-25 years ago, leading to yield stagnation and high incidence of pests and diseases.

Many farmers prefer lowland rice varieties with higher yield potential like Swarna and Pooja, but terminal drought often causes severe yield reduction in these long duration varieties. On the other hand, flash floods that submerge the crop for 1-2 weeks have become increasingly common in the shallow lowland ecology.

Therefore, the shallow lowlands need a variety that offers better yield compared to other popular varieties and can tolerate short-period submergence resulting from flash floods. It is also necessary to have a variety with an ideal duration of 115-120 days, so that under non-stress conditions the field can be harvested to accommodate a second crop of pulses, oilseeds, or vegetables. Varieties of this duration will also be suitable for summer rice.

Bina Dhan 11, developed by the Bangladesh Institute of Nuclear Agriculture (BINA), fits these requirements well and has a yield potential of 5.5 tons/ha. This variety is a submergence tolerant version of the Indonesian mega variety Ciherang and can tolerate complete submergence for 2 weeks. It yields medium slender grain and has the potential to replace other existing low-yielding varieties of the same duration while offering a yield advantage of 1-3 tons/ha over other varieties under submerged conditions.

This variety was introduced jointly in India, Bangladesh and Nepal under the ‘seeds without borders’ initiative which establishes common parameters for varietal release across several countries to enable new rice varieties reach farmers in a shorter time frame. IRRI, with the support of Department of Agriculture (DoA), Government of Odisha, introduced ‘Bina Dhan 11’ in the state in 2016.

IRRI popularized this variety in Odisha through varietal cafeterias, head-to-head trials and cluster demonstrations in the last five years. High yield and stability of production across years led to farmer acceptance of this variety as manifested in increased seed demand. Odisha State Seed Corporation (OSSC) responded to the increased demand by providing quality seeds through its network of PACS and dealers (Graph 1). 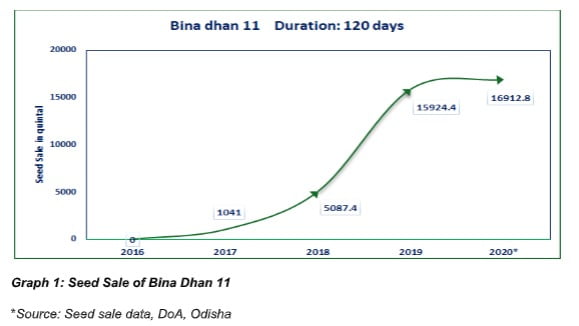 Submergence tolerance, short duration, non-lodging feature and lower susceptibility to pests and diseases which avoids or reduces crop loss, suitable quality for puffed and pressed rice demanded by industry are the traits that make this a popular variety among farmers. Women particularly like its good taste and fuel efficiency as the parboiled rice takes 10-15 minutes less to cook compared to other varieties.

This variety appears to be poised to consolidate its position and expand its market, which is reflected in the plans of OSSC and other private growers who are planning higher production in the coming years.

Fact Check: Will Price Of Covishield, Covaxin Be Reduced For States & Open Market?

Odisha Govt Focus On Diversification Of Farm Sector In Kalahandi

Bharat Bandh Tomorrow: Here’s What All Will Be Hit

Land Acquisition A Smooth Affair For MCL In This Odisha…