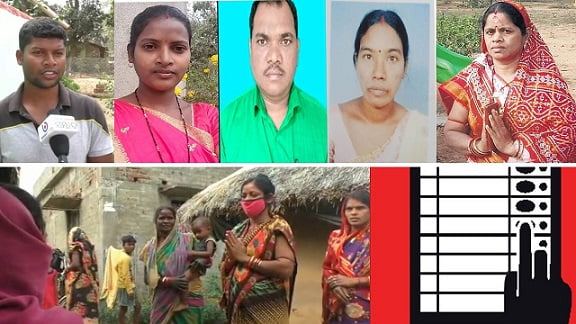 Bhubaneswar: The upcoming panchayat elections in Odisha are seeing several family contests: husband and wife, and brothers pitted against each other.

A couple, Basanta Pradhan (55) and wife Suryalata (45), are contesting against each other for sarpanch post of Jamunali panchayat in Angul district’s Banarpal block. Pradhan has the BJP’s backing. The BJD is supporting Suryalata.

The couple said they don’t bring politics inside their home. During campaigning, they make it a point not to attack each other. Both have wished each other victory. “Whoever wins, the sarpanch will be from our family,” Suryalata said. The couple has two sons.

In an interesting contest, three brothers have filed nomination papers for the post of samiti member of Mayakguda panchayat in Mathili block. Chitrakonda MLA Purna Chandra Baka’s son Mahesh Baka is pitted against his cousin brothers, Bishnu Prasad Baka, who is being backed by the Congress, and Titu alias Mahesh Kumar.

The MLA’s niece Laxmipriya Nayak, the Mathili block chairman, is also contesting for the post of zilla parishad member from Mathili.

If elected, they have promised to install a bronze statue of Rabindranath Tagore in Pandua village, besides carrying out development works. “The ancestral house of Tagore, where he spent some years and wrote the dance-drama Chitraganda, in the village lies neglected now,” Kailash Chandra Swain (62) said.

Lipinda panchayat in Sambalpur district is also seeing a family fight with husband and wife, Prafulla Mirddha and Munmun Majhi, contesting for the sarpanch post. Mirddha, a two-time panchayat samiti member, is former vice-chairman of Jujumura block. Majhi is a former zilla parishad member. The couple said they are in the fray to prevent outsiders from becoming the sarpanch.

Minu’s sister-in-law Annapurna Chattar is also contesting for the post of zilla parishad member from Jashipur block with Congress support.

For the sarpanch post of Bhatimunda panchayat in Cuttack district’s Tangi Choudwar block, Tapas Sahu and his wife Sashmita Sahu filed nominations. Sashmita later said she would withdraw her nomination. In the last polls, she was elected as a zilla parishad member.