Twelve years ago, Carolina Prada from the South American country of Colombia landed in Delhi with a scholarship from the Indian Council for Cultural Relations (ICCR) to learn Odissi. Soon Carolina got a chance to watch the unmasked martial dance of Mayurbhanj Chhau and fell in love with it instantly.

And that love-at-first-sight for Mayurbhanj Chhau changed the course of her life. She came to India for a year but has not been able to go back to Colombia from her home-away-from-home in India. Mayurbhanj Chhau continues to be her passion, profession and mission for life.

A leading professional female dancer of the tradition today, Carolina performed in the famed Uttar Sahi Chhau troupe of Mayurbhyanj in the 135-year-old prestigious Chaitra Parva hosted in Baripada. 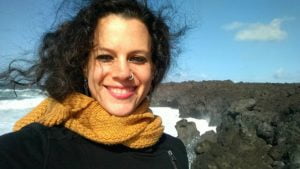 Excerpts from an exclusive interview with Odisha Bytes:

How did you land in India?

As a teenager, I was quite passionate about dance. I dabbled in ballet, Jazz, modern, contemporary, the sword dance of Columbia, Aikido, Taichi and even Kung Fu in my country. I learnt it all institutionally for eight years.

However, it was Bollywood that introduced me to Indian dance. I came across a dance teacher from Mexico, Isolda Eugenia Acosta, who had stayed with Odissi legend Sanjukta Panigrahi for seven years. She taught me Odissi and told me stories about Gotipua and Chhau dances of Odisha. She also encouraged me to apply for the ICCR scholarship to go to India to learn Odissi.

Thus, I landed in Delhi in 2008 as the first ICCR scholar from my country to study Odissi at the Shriram Bharatiya Kala Kendra where Chhau dance was also being taught. Always fond of martial arts, I got drawn towards Chhau instantly. There I met my Guru Janmejoy Saibabu, who was from Mayurbhanj. It has been 12 years and I am continuing to learn under his tutelage.

How come that you became a part of the traditional troupe of Uttar Sahi in Baripada being a foreigner?

I feel blessed to be accepted as a daughter of the soil. For the Chhau dancers’ family of Mayurbhanj, I was no more a foreigner after coming to Baripada for several years to know the roots. I feel intimately attached to this land and the people who have granted me generous love and care.

A large number of girls learn and perform Mayurbhanj Chhau. But why don’t we see anyone taking it up as a profession?

Much credit goes to the girls of Mayurbhanj who dared to enter Chhau that was the domain of men. It was the vision of the Chhau exponents of the land that facilitated their entry. And the entry of great Odissi dancers like Sonal Mansingh, Sharon Lowen and Ileana Citaristi into Chhau also inspired them a lot. However, without any opportunity to perform or even teach, they are not able to take it up as their profession. They are passionate and committed. All they need is promotion.

We find a large number of foreigners coming to learn Odissi in Odisha, but we hardly see anyone like you learning Mayurbhanj Chhau. Why?

I feel the lack of required information and proper publicity are the reasons.

How has been your struggle to survive as an Indian dancer in foreign soil?

The challenges have been enormous but worth taking. Its outcome has been quite fulfilling too. After the ICCR scholarship period was over, I was left to fend for myself as a dancer who learnt Odissi and Chhau. It was a tough time to earn a living as a traditional performer of both the dance forms. Of course, I knew a variety of dance forms and there were offers too to do fusions and corporate shows to earn good money. But I never wanted to compromise with the traditions. So, I preferred to teach dance at two schools in Delhi to survive.

Finally, after a struggle of nearly eight years, I joined the Embassy of Spain as a Spanish teacher that fetched me both financial stability and freedom to focus on my dance till now. I have also started teaching Mayurbhanj Chhau recently.

How has been the audience appreciation for Mayurbhanj Chhau beyond Baripada?

How much do you miss your family and country?

I miss my mother and sister too much. Both of them have given me their unconditional and infinite support during my journey as a dancer. I have also enough of fond memories of my country of birth. But, the goal of my life goes beyond these personal feelings and longings. I have to be in India where I have my guru and my dance-life.

Would you wish to settle down in India?

After staying in India for more than 12 years as an Indian dancer, I feel that I am already settled down here. Although I still carry a passport as a citizen of Columbia, my heart is already in India.

All But One Khurda’s New COVID-19 Belong To Bhubaneswar