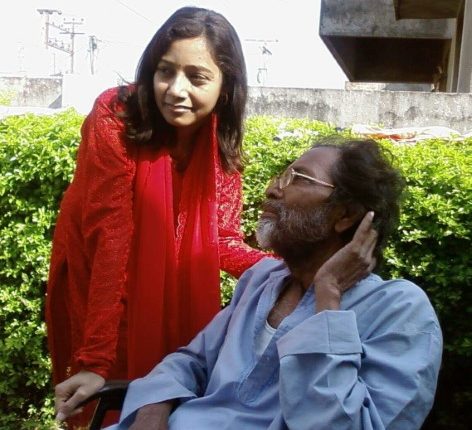 Bhaswati Basu dons a colourful cap, literally, as a multi-talented artiste — like her illustrious father, late Asim Basu. She is the most visible and versatile face today among the few female talents in the field of Odia theatre.

Winner of the State Film Award for the award-winning Odia film Kathantara, Bhaswati has played the lead role in 15 tele-serials, three films and 25 stage plays. She has directed 13 plays apart from being the script writer and playwright of 19 productions. She also conceptualised Odisha Pavilion at the India International Trade Fair in New Delhi.

Following are excerpts from an interview:

Being Asim Basu’s daughter, was there any pressure on you to follow in your father’s footsteps to be in theatre? What career plan did you have during your school days?

Not really. Rather I didn’t know much about my father’s profession when I was a kid. However, I had a knack for drawing and painting which I didn’t work on. I didn’t set any goal in life as such. May be, I wanted to be a teacher but I was not that committed. It was only when I joined the drama department of Utkal Sangeet Mahavidyalaya that I realized what a theatre production actually is and fell in love with it instantly.

How did your study of drama at Utkal Sangeet Mahavidyalaya help you in your career or your vision as an artiste?

Education always helps in the growth of an individual. Apart from understanding the subject better, my studies made me confident in life and cleared my conceptions about many matters. An actor should know all the technical aspects. One should know about lights, set and music, and should be able to interpret and analyse a given situation and character. My study of theatre prepared me in this regard to face the future challenges.

You have worked a lot in theatre, cinema and television. Which has given you greater satisfaction?

The stage of course where I feel like an empress. It’s my bastion, my kingdom. Though television has given me money and fame, and people do recognise me by the name of the characters I played, it doesn’t satisfy my creative urge. I did a couple of commercial movies also, but was not happy with the way they were made. Moreover, I like doing parallel cinema and short films where I often get to play challenging characters. But nothing can match theatre. Those intense rehearsal sessions, the instant audience reactions, the thrill I feel every time I set my foot on the stage, every bit of the process makes me go crazy. I love theatre.

You have been on and off the stage as an actor, director and playwright. Which of these three roles is dearest to your heart?

I am a born actor. Nothing is dearer to me than acting. Not that I had not given my best to other faculties… I wrote some dramas, directed many plays too but the pleasure I get while portraying a difficult role has no match.

You have worked with some of the stalwarts in the field of theatre and cinema like Sadhu Meher, Raju Mishra, Bijay Mishra and Ajit Das apart from your illustrious father. How have you benefitted from your association with them?

It’s been a real blessing for me to work under so many great talents. Whatever little I have achieved so far is only because of them. They literally taught me how to act, how to interpret lines of dialogue, how to understand the emotions hidden between the words written in the script, what is body language and how does it affect the characters. The list of my learning from them is endless. I can never say enough about how much I owe my success to them.

Where does Odia theatre stand today in Indian theatre scene?

Odia theatre is in better shape now than it was a few decades back. It has not only made its presence felt in Indian theatre scene, it is appreciated overseas also. We don’t have much financial resources in comparison to other states, but it has never been a barrier to popularise our theatre.

Theatre and cinema apart, you are now known for your poetry. When did you discover the poet in you?

The lines were always there but it was just a matter of time to transform them into paper. During my college days, I attempted to write poems but with time, the poet in me went into hibernation due to struggle for survival. In 2017, I went into deep depression following my father’s demise. I couldn’t sleep for nights. It was an extremely difficult phase which I found hard to overcome. That made me write again to subside the intrinsic pain. It turned out to be a path to battle my grief. I penned about 70 poems during the painful phase that was published as an anthology. And people started discussing me as a poet.

Have you ever felt frustrated over lack of required support and respect for artists in Odisha?

Actually I am a self-contained person. I became an artiste by choice. There was no compulsion at all. I was well aware that there was little scope to earn money in this profession. I also knew that there were so many other options which I could have explored. So why should I grumble? And to talk about respect, I have got much love and respect from the people.

Paintings Of 16 Women Artists On Display At Exhibition In…