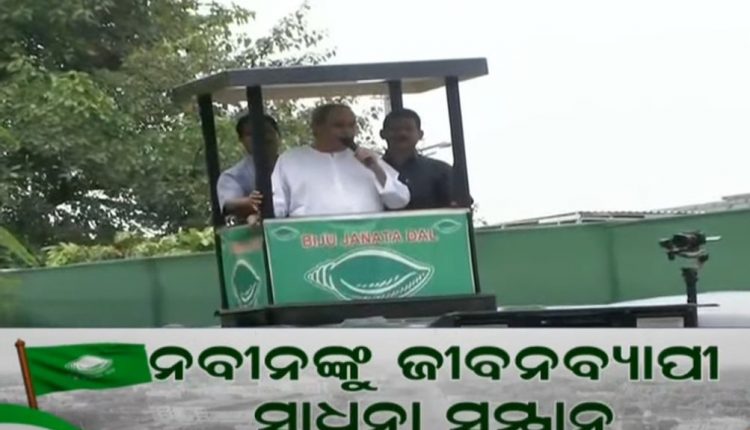 Thousands of workers and supporters of Biju Janata Dal (BJD) gathered at Biju Patnaik International Airport in Bhubaneswar to welcome the Chief Minister. The airport wore a festive look as the ruling party made elaborate arrangements with supporters from different parts of the state holding party banners and flags and placards.

As Naveen came out of the airport, the airport echoed with slogans raised by BJD workers in support of Naveen as troupes of folk dancers performed to blaring music.

The BJD president went standing in a special bus from the airport waving at the party workers to his residence Naveen Nivas. He also gave a brief speech to the people from inside the bus which was used by him in 2019 general elections.

The entire stretch was lined with people cheering him on both sides of the road. It was also decorated with party flags and banners.

The Commissionerate Police had made adequate security arrangement keeping the huge crowd in view. Around 30 platoons of police force had been deployed at various places in the city to regulate traffic while 100 senior police officers were in charge of security for the occasion. The traffic at almost all junctions on the route was stopped for half an hour for the chief minister’s motorcade to pass.

It may be noted that Naveen received the Capital Foundation Lifetime Achievement Award in recognition of his distinctive and outstanding leadership qualities from Chief Justice of India NV Ramana on Sunday. He dedicated the award to the people of Odisha who have reposed faith in him and given him an opportunity to serve them.

Naveen left for Delhi on August 28 and interacted with ambassadors and envoys of at least 16 countries at Odisha Investors’ Meet, as a part of the curtain-raiser of the third edition of the Make-in-Odisha Conclave, the very evening.  This was the third investment roadshow after Dubai and Ahmedabad ahead of the mega-industry carnival from November 30 to December 4.

In Odisha’s Ganjam, ‘Gandhigiri’ To Stop People From Defecating In Open