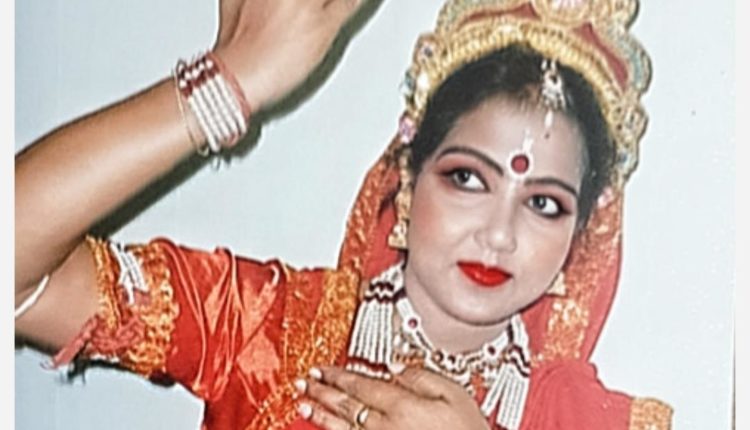 “Why do these men dance in the costume of women?”

Twenty-eight years ago, a school-going girl of Baripada had asked her father who had taken her out to watch the famous annual Chaitra Parva, the annual Chhau dance festival, in their home town.

This question from an innocent girl ignited a movement – entry of women in the male-dominated martial dance tradition of Mayurbhanj Chhau.

The girl was Barnarupa Mohanty, an established female Chhau dancer and trainer. She is the winner of the Best Female Artiste Award from the same famed festival six times besides being a recipient of the National Scholarship and Fellowship from the Ministry of Culture.

Her father, who was instrumental in this historic development of women in Chhau, was well-known lyricist Sangram Keshari Mohanty, a household name for his famous Odia film song “Aei Jhuma Golapi Belare”.

Excerpts from an interview with Odisha Bytes:

No. Old records reveal that some women were felicitated as Chhau artistes. So, the tradition of female dancers was there. However, for various reasons, it was discontinued for many years. Chhau practice and performances were usually happening during late evenings in our town and it was a problem for women to join. This being a group dance, the girls were also required to dance with boys that, which was not acceptable to the parents, especially to the in-laws. Society was too conservative then.

How did the revival happen?

As kids, we used to watch the Chhau festival known as Chaitra Parva. I would wonder why men were performing in female attire. On one such occasion, while watching a war dance by women who were men in female impersonation, I asked my father whether girls were not capable of doing a war dance being enacted by boys. “Girls can do anything. You have read about Rani Laxmi Bai who was a great warrior. Even today’s women are already participating in a real war. This is just an imitation of a war scene. You can learn Chhau and do this dance on stage,” my father explained to me.

Since I was dancing in our school’s cultural programmes, I wished to learn it. My father had already established Harihara Kalamandir, an institution of dance and music in Baripada. He arranged a Chhau guru to train 10 girls including me. Since it was exclusively a troupe of girls and the classes held at our place, no one objected to it. Our all-girls troupe had its first stage show at Mayurbhanj Utsav hosted in Bhubaneswar in 1993. Soon after, we performed in the Chaitra Parva in our town. It has been 28 years since then. Female characters are not enacted by men anymore.

But we hardly come across professional female dancers in Mayurbhanj Chhau barring the few foreigners who mastered it.

Unfortunately, marriage draws an end to their dance careers. I was fortunate to marry a Chhau dancer so I could continue my passion. Lack of opportunity for Chhau dancers is the other major factor. Girls here are getting more attracted towards Odissi these days than their very own Chhau as Odissi offers a bigger platform, publicity, recognition and even employment.

Did Odissi not attract you?

I learned Odissi long before getting into Chhau. I love Odissi and I still perform and teach it at our institute. I also dance and teach Jhumar. But Chhau has been my focus. It is a sacred responsibility for a Mayurbhanj girl to promote our own dance tradition.

My decision to focus on Chhau has also reaped me rich dividends. I was awarded the  National Scholarship and then Junior National Fellowship to conduct research on women in Chhau dance of Mayurbhanj. I have been performing as a repertoire member of the Dakshin Sahi Chhau Nrutya Pratisthan since I started doing Chhau 28 years ago. I have won the best female artiste of the annual Chaitra Parva six times. As a Chhau artiste, I also toured Trinidad, Tobago, Laos and Bangkok in addition to several cities across India. So, Chhau has offered me so much joy, pride, and recognition.

You are into Chhau, Jhumar and Odissi. Have these different dance forms, in any way, complemented each other in your growth as a dancer?

Personally, I am very fond of the veer-rasa in Chhau and enacting the character of Shiva gives me the greatest joy. But as a female artiste, I often perform female characters. Training in Odissi has helped me to bring in the required feminine grace into my Chhau dance. Similarly, my Chhau background helps me to portray the tandav elements in Odissi. Jhumar is an integral part of Mayurbhanj Chhau. The concluding scene of a Chhau presentation requires Jhumar.

Was this career as a dancer your first choice?

My grandparents were writers. My father is a lyricist who devoted his whole life to cultural research and activism. My mother is also very passionate about cultural activities. So, all our discussions at home always revolved around literature and culture. Thus, it was natural for me to follow the family tradition as a duck takes to water. While I got into dance, my two sisters pursued music and painting.

What has been your most memorable moment as an artiste so far?

It was the day when my three-year-old son performed Mayurbhanj Chhau on stage. He is 10 now and enjoys dancing. My father-in-law is known for his great patronage for our Chhau dance tradition. My husband made him happy and proud by becoming a Chhau performer. The family accepted me as its dancing daughter-in-law. And finally, our son is carrying forward the family’s legacy of Mayurbhanj Chhau. What more could I have aspired for as an artiste!

Loot Of Passengers With Sedative: Medicine Shop Owner Among 6 Arrested In Bhubaneswar