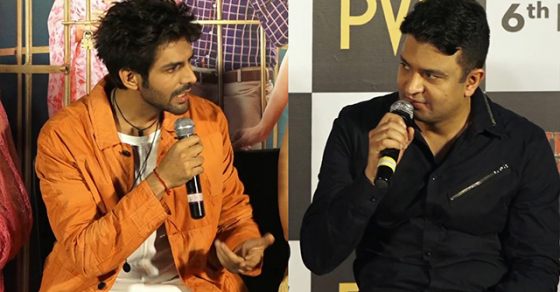 Mumbai: After reports of a fallout between Kartik Aaryan and Bhushan Kumar started doing the rounds earlier in the day, the actor and the T-series honcho took to their official social media handles to clear the air.

Mocking at the news portal, which had carried the story in the day, Kartik retweeted Bhusan’s post, questioning the alleged fallout, and wrote: “Awesome quality of reporting”.

On Tuesday afternoon, a news portal reported that Kartik had refused to resume shooting for Bhushan Kumar’s next until a COVID-19 vaccine was in place and also didn’t agree for the pay cut amid the crisis.

Reportedly, this irked the T-series head and he ousted the actor from his upcoming movie.

The report also claimed that Bhushan had put the shooting of Om Raut’s action-thriller on hold and was looking for a replacement for Kartik.

Post this film, Bhushan had announced his next project with Kartik.

The actor will be next seen in Anees Bazme’s ‘Bhool Bhulaiyaa 2’.