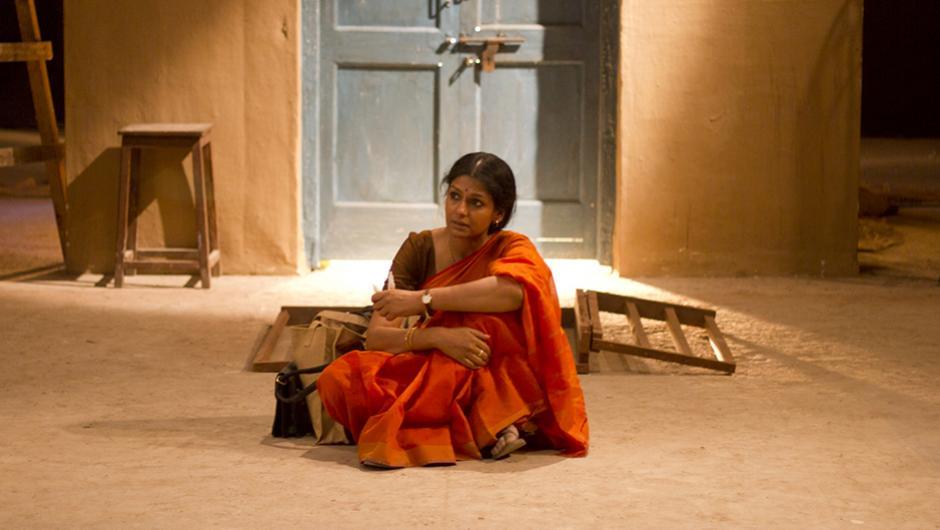 ‘Khamosh Adalat Jaari Hai’ (2016) by director Ritesh Menon is definitely not the first adaptation of Vijay Tendulkar’s Shantata! Court Chalu Ahe (1963), but can be considered one of the notable renditions among all its theatrical and cinematic versions. All the actors are well-chosen for their respective characters. However, the play comes to life by Nandita Das in the role of Ms. Leela Benare. And of course, Saurabh Shukla playing Sukhatme cannot be ignored at all. As a lawyer, he is equally riveting, witty and entertaining as he was in the guise of a judge in Jolly LLB and Jolly LLB2. In fact, he speaks the most in the entire film that seems more like a drama of three Acts- the way it was written by Tendulkar.
The drama of three acts is condensed into a movie of 145 minutes- every single minute is compelling and demands your whole attention. Ms. Leela Benare, as in the original play, enters the village rehearsal room in an absolutely casual manner-full of lively charm and fun-loving disposition that borders on flirtatious actions around Samant (Abhay Mahajan). When Ms. Benare scares the hell out of Balu Rokde (Ajitesh Gupta) and recites a poem jovially, little do we guess what is to follow. Sukhatme says there is a little girl in her that refuses to grow up, and Nandita puts up these childish pranks so perfectly, especially when she calls Samant to sit near her and excitedly recites: “The grass is green, the rose is red, this book is mine, till I am dead.” She is just like a child demanding everyone’s attention.
Amid pans, cigarettes, ear-buds and pulling each other’s legs, when the situation suddenly turns grim, it is difficult to realise. Even Mrs. Kashikar’s attitude towards Ms. Benare and Ms. Benare’s reluctance to accept infanticide as the ‘mock’ charge does not warn us. The transition is gradual on one level for viewers who have read the play, and also sudden because it is quite unexpected for the film-viewers who haven’t witnessed the original drama. Sukhatme, Mr. Kashikar (Yusuf Hussain) and Mrs. Kashikar (Pravina Bhagwat Deshpande) quite suddenly try to make others serious about the mock trial, under the pretext that Samant might misunderstand the court proceedings. When Mrs. Kashikar pressurises the nervous Balu to vomit the truth, and Samant also starts questioning if this is real or false, we begin to realise the so-called mock trial has some hidden reality to it. By then, even Ms. Benare has stopped her usual banter and laughter, and is looking stupefied and pale- an expression that is both shocking and embarrassing!
Ms. Benare is reminded of her ‘folly’ of falling in love with her uncle at age 15, and being ditched by Prof. Damle, and carrying his child in her womb, out of wedlock. The imagined monologue of Ms. Benare is noteworthy, and Das is at her best in showing the plight of so-called modern, emancipated Indian women! She raises an undeniable truth- how the body of a woman brings her all pain and pleasure, and yet she cannot be detached from it. Strangely, nowhere is the character and conduct of Damle discussed. The jealously of women like Mrs. Kashikar who make other women victims in a patriarchal society is clearly shown. The personal and professional life of Ms. Benare becomes blurred, when her moral conduct is questioned and her termination from her workplace is discussed. Unwed motherhood is still seen to be a crime, and in such an act the man is not subjected to the same humiliation as the woman, is shown to be true even nearly after five decades of the play being written by Tendulkar. The theme is of contemporary concern, and perhaps that is why Ritesh Menon chose to make this film in 2016. The film must be seen to understand the hypocrisy of vulture-like men such as Karnik (Rajeev Siddhartha), Ponkshe (Swanand Kirkire), Sukhatme and Mr. Kashikar towards vulnerable women in the Indian society.
What is most appreciable is that the tempo, spirit, the atmosphere and the feeling of the original drama is kept intact in the entire film.

‘Unmanned level crossings to be eliminated in a year, tracks replaced to ensure safety’