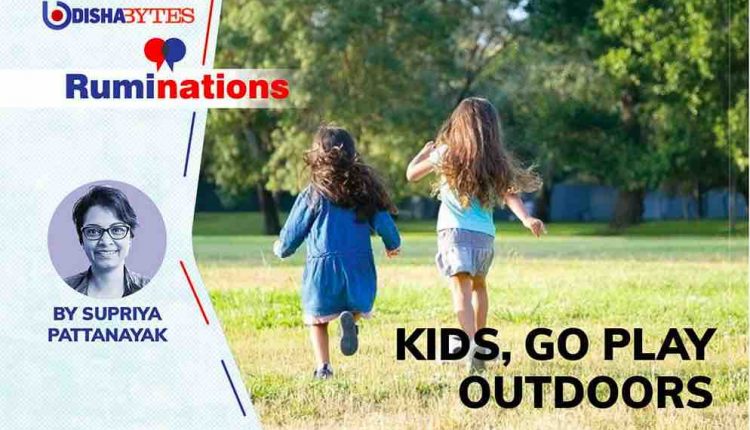 In the midst of a meeting, sudden excited screams emanated from my son’s room causing some background noise. Apologising for the disturbance I put myself on mute and rushed to tell him to tone it down. Apparently, he was playing a game online with his friends and having won a task was basically screaming with joy. It kicked off a conversation on very similar experiences by others, especially exacerbated during the pandemic.

Until about a couple of decades ago, playing always meant something physical. In fact, everything was done face to face, be it attending school, games or even socialising. We had to make sure we were friends with most people, fought with a few, shared our toys, hugged and even cried on someone’s shoulder. Real-life experiences taught us social skills that we would never have learnt otherwise.

This gradually changed with the advent of computers and the internet to the extent that today’s kids basically live in a virtual world, facilitated by their smartphones, computers and gaming devices. Across the world, most kids from a sound financial background have a phone by the time they are in their teens. In countries like the UK, almost 100% of teens and young adults own a smartphone, with it being mandatory in most high schools. Globally the likelihood of owning a smartphone is higher, the younger you are.

Kids and young adults rarely ever step out for anything other than for school. With the pandemic that has been further reduced. Physically going someplace is considered a pain, a chore as everything in their world is available at their fingertips, from studying, shopping to socialising. They even book virtual games and watch movies together. I was once told by a kid that it made no sense to visit the Zoo in the rain when he could see the animals online via webcams from the comfort of his home. I wonder what feeling the tiny images on the computer evoked in him. Did the tiger running towards the camera scare him?

With the rapid expansion in availability and increased affordability, the later GenZ’s and all of Gen Alpha, aka kids born post-2005 are growing up with tech as part of their life. Having never lived in a world where phones or computers did not exist, they learn it inherently rather than as an acquired skill.

However, the rapid growth in this online world is inversely proportional to the growth of social skills. The lack of social interaction is leading to not just a stunted development of basic survival and interpersonal skills but in the long term, it affects a person’s personality development too.

If you have never met a room full of people, you miss out on learning the non-verbal clues. You miss out on deciphering gestures, spontaneous facial expressions, eye contact and other subtle indicators during a conversation. If you always choose your team members based on who you are comfortable with when you play online, how will you ever learn to work as part of a new team, how will you learn to ask for help from strangers and most importantly how will you ever learn to avoid or resolve a conflict? The controlled school environment may not provide enough experience. Without being ever exposed to the hands-on skills as part of real life, when you actually get exposed to it in a personal or professional environment, as an adult, it will become hard to cope with the situation.

If the present generation is snowflakes I wonder what the next generation will turn out to be. Trends like ghosting, which is basically abruptly cutting off contact with someone without giving that person any warning or explanation, are picking up pace as people don’t have the courage to actually face people in person or rather have the option not to.

On the flip side, the kids do not have it easy either. Online or computer communication, lacking the important ingredient of tone and body language is inherently impersonal in nature. Studies show that people who tend to participate politely in person may become more impolite or uninhibited when they communicate using conferencing or electronically. This may lead to a toxic online environment, probably because you never see how your rudeness affects the person as chances are you will not see them later.

In addition to this, the kids are exposed to a plethora of unseen and hence mostly unmonitored dangers in their online lives. They may be virtually bullied, ghosted, sexually groomed or even cancelled. Often they have to keep up a facade, mostly fake, like using insta filters to look good or even post only happy pictures, to ensure their popularity or just for survival. After all, no one can check out the veracity of what you tell them. So they do learn survival skills, but just not the ones the current real-life demands.

Occasionally, the discrepancy between the online persona and real-life can be so disparate that it can lead to a completely different story, with no link to reality. Even keeping up with mild discrepancies can have damaging consequences to their mental health. Compounding this will be the lack of physical contact, a fundamental human need.

What is guaranteed is that this change is irreversible. However much we may feel nostalgic for our past life, the kids of today are growing up in a different culture and will be adults of tomorrow. They will be the ones in charge, who will dictate reality.

Their limited social skills along with their enhanced environmental consciousness, mostly armchair social activism and cultural sensitivity will redefine our society. Just like Gen Y changed the focus away from dedicated hard work to work-life balance, business and society, in general, will have to cater to the amended needs of the next generation. Just like our parents and grandparents had to learn and adapt to the new world of technology, we will be faced with a new normal with massive social changes driven by the desires and needs of the next generation. This is already manifesting itself in areas like online shopping leading to the reduction of physical stores and redefining the high street itself in western countries.

As we head into a new world of altered reality, we may be helpless to change course but if we want to retain a semblance of the current social norms we can support our kids by making a concerted effort to teach them social skills even if we have to bribe or drag them outside their comfort zone. When have kids ever done what is good for them anyway? It’s high time for parents to tell them to put away their devices and go play outdoors.

UP: 45 Kids Die In Firozabad In 10 Days; Dengue Suspected