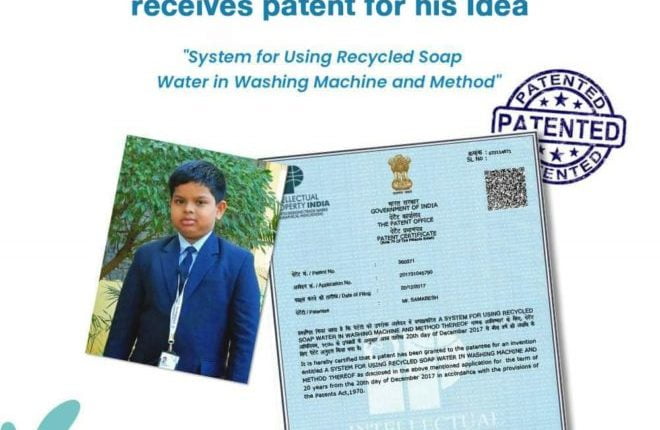 Bhubaneswar: Young, school-going children are turning entrepreneurs, creating apps and winning international competitions. Some of them have also earned patents for their works.

Ayushman Nayak, a Grade 7 student of KIIT International School (KiiT-IS), is one such bright student who has earned a patent for his innovation.

Ayushman has received a patent for his idea “System for Using Recycled Soap Water in Washing Machine and Method” from Intellectual Property, Government of India.

The patent is valid for 20 years and since Ayushman is a minor, it is in his father’s name Samabesh Nayak.

Ayushman’s idea was based on developing a washing machine where the soap water will go through five layers of filtration and then can be stored to reuse. He had developed this idea when he was in Class 3 and had received the APJ Abdul Kalam Ignite Award in the year 2017 organised by National Innovation Foundation (NIF)-India.

Founder of KIIT and KISS Dr Achyuta Samanta congratulated Ayushman for his achievement and shared pictures of the boy.

Incredibly proud of #MyLoveableKIITian from @KiiTIntlSchool, Ayushman Nayak of Grade VII who has received a patent for his idea “System for Using Recycled Soap Water in Washing Machine and Method” from Intellectual Property, Government of India. pic.twitter.com/UQx0wYpedl

The boy is a passionate painter too. His innovations do end here as he takes inspiration from the daily world and wants to create new technologies for the benefit of the people.

[Watch] Lifeguards Save Tourists From Drowning In Puri Sea