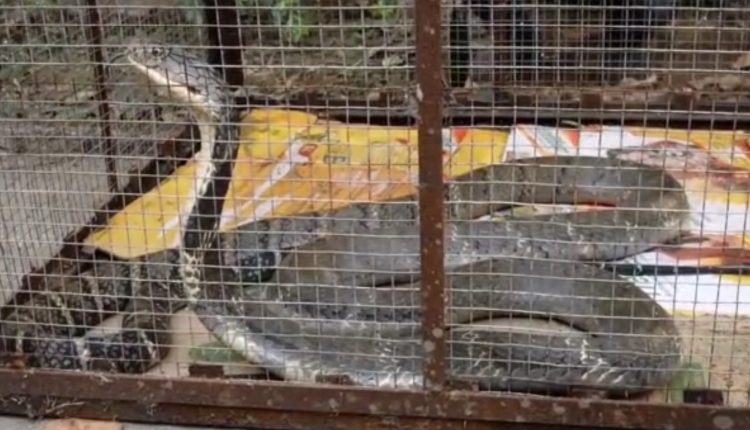 Malkangiri: A King Cobra, which had created panic in a village of Odisha’s Malkangiri district for the last few days, was captured by Forest officials on Friday.

The villagers of Pitagota village under Karukonda block of the district were spending sleepless nights after some of them spotted the venomous snake and informed the Forest officials a few days back. Though the Forest officials visited the village several times, they failed to trace the snake as it used to escape from the spot.

On Friday morning, the villagers again found the snake moving in a house and informed the Forest officials. Luckily, the snake was present in the house by the time the officials arrived there.

The Forester from Karukonda section along with forest guard and rescue team managed to catch hold of the snake and safely kept it in a cage. They identified it as King Cobra that measured around 11 ft.

“The rescued King Cobra has been kept in Malkangiri Forest Range office. It appears to be in good health. But veterinarians are making its medical examination. We will release it in forest area after confirming that it was in sound condition,” said Jagannath Bisoi, Malkangiri Ranger.