Know The Allegations Made By Varsha Against Anubhav Here 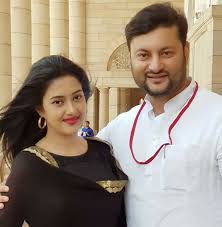 Cuttack: From alcohol related abuse to physical torture to financial bungling, Ollywood actress Varsha Priyadarshini has levelled a series of allegations against her actor husband and MP Anubhav Mohanty.

In her 8-page petition filed at the Sub-Divisional Judicial Magistrate (SDJM) court here, Varsha has portrayed the actor as anything but a hero in real life. She has accused him of being a ‘professional drinker’ who used to torture her physically and mentally under the influence of alcohol.

Varsha has stated that whenever Anubhav was getting drunk, he scolded her in abusive language, beat her with lathi and kicked her in presence of his parents who never objected him nor came to her support.

Stating that the exploitation was going on since their marriage, Vasrsha said she or her family did not bring the matter to light considering their public image. Taking advantage of it, Anubhav’s torture continued unabated.

Claiming that Anubhav has deprived her of attaining motherhood, she stated that while she used to wait for him to return home for dinner, he would come drunk late night from parties with friends and beat her mercilessly.

On financial bungling, the actress stated that though both of them had acted in several films together after marriage, Anubhav has not given her any money till date.

Citing the latest case of inhuman abuse, she said during the lockdown, Anubhav’s entire family left for Delhi leaving her all alone in the house. They neither enquired about her nor gave any money till their return on May 25. “I went through a lot of mental torture during the period,” said Varsha.

On June 7, Anubhav and his father scolded Vasrsha in foul language for around two hours, she alleged. On June 11, they forced her to file divorce on mutual agreement.

In her petition, Varsha has appealed to the court to order Anubhav to pay a compensation of Rs 13 crore besides Rs two crore towards medical expenses and monthly maintenance of Rs 50,000.

Rhea Chakraborty Is Not A Gold Digger, Feels Taapsee Pannu