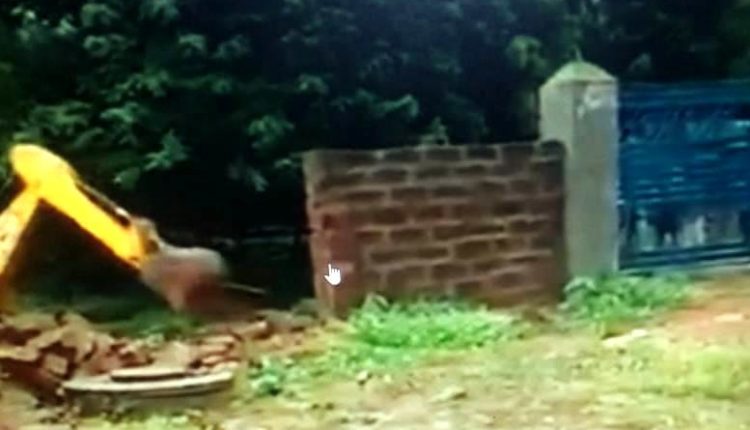 The demolition of the boundary wall of the Mahila Samiti was carried out by the company in presence of Khurda collector Ashok Beuria, Begunia tehsildar Prithviraj Mandal and police.

Briefing mediapersons, the Khurda sub-collector said that the boundary wall has been demolished to allow the passage for the flow of the natural water.

People of Sarua village had lodged a complaint with the district administration against the OTV MD Jagi Mangat Panda and her family for unauthorised construction of the boundary wall in their village. They had also alleged that the company officials had blocked the road to the village pond and their agricultural land.

Acting on the complaint of the villagers, two cases were registered at the Baghamari police station.

It may be mentioned here that Khurda Collector Sanat Kumar Mohanty in his report had stated irregularities in the purchase of the land by OTV and recommended the Revenue Department to initiate a Crime Branch probe into the case.

Acting on the recommendation, joint secretary, Revenue and Disaster Management, PC Mohanty on October 12 requested Additional Director General of Police, Crime Branch, for a criminal investigation into the sale of Rayati lands at Sarua village in Begunia Tehsil belonging to Scheduled Caste persons in favour of Odisha lnfra Tech Pvt Ltd in an alleged benami transaction through Rabindra Kumar Sethy, a former driver of the Ortel Communication Ltd (ORTEL), an OTV group of company.

Meanwhile, the Crime Branch has begun an investigation into the case.

Haryana Cops Rescue Woman Locked Inside Toilet For Over A Year