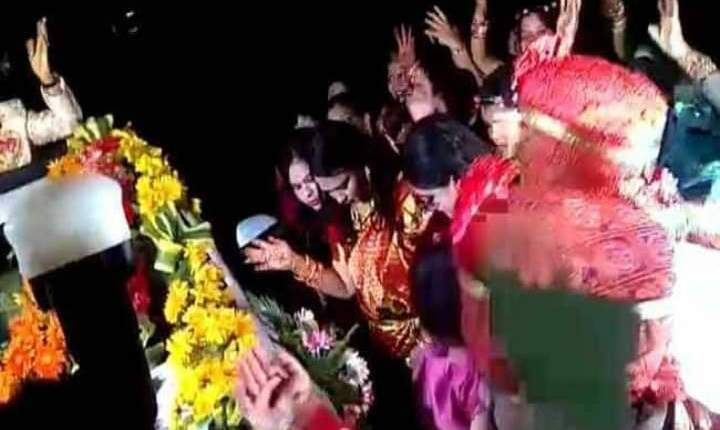 Bhubaneswar: Have the will, will do it. Corona or no corona. This seems to be the motto of the people who are hell-bent on organising lavish wedding functions, defeating the efforts of the state government to contain the pandemic from spreading.

Despite the state government’s aggressive awareness drives emphasising social distancing and wearing masks, there have been at least a dozen such violations this month. In just 13 days, the state has reported around 7,000 COVID positive cases of which 30.9 % were spread through local contacts, reported Hindustan Times (HT).

Bhadrak: In the latest incident, local media published pictures from Bhadrak’s Basudevpur town where a mass marriage event was organised at a temple near Balinagar Yadav ground. At least 20 marriages were being solemnised simultaneously with hundreds of people in attendance with very few of them wearing masks. Social distancing was of course, out of the question. The local police, who got whiff of the event finally came to disperse the crowd.

Puri: Earlier on Tuesday, Ganesh Patra of Nijagadakurukhi Patrasahi village in Puri’s Pipli block had invited over 500 people for lunch near his home for his son’s marriage. The police and local administration reached the spot and not only sent the guests home but also distributed the delicious delicacies prepared in their honour among poor people in the area, the HT report added.

“The man not only violated the COVID guideline of having not more than 50 guests in a marriage function but also didn’t observe any social distancing. Very few people wore masks,” Pipili tehsildar Sapan Nanda was quoted as saying by HT.

Kendrapara: Again on Tuesday, police in Kendrapara district arrested seven persons who had organised the marriage function of a local contractor. Over 500 people had been invited. In another incident in Pattamundai block of the district, a case was lodged against seven persons for organising a religious congregation. This also included the husband of the sarpanch. They were installing a new image of the local deity after the existing one was broken, the HT report said.

Ganjam: The Naib Sarpanch Krushna Chandra Jena of Dengapadar gram panchayat in Polasara block of Ganjam district was arrested for doing a ‘yagna’. According to the HT report, Jena had allegedly organised a religious gathering of over 500 people for the installation ceremony of a Hanuman temple at Mardarajpur village on July 6. What is more, the organisers also thrashed a local youth who had objected to the gathering.

Ganjam/Goplapur: Hotel Mayfair was sealed for seven days for hosting a marriage function. Police arrested the groom, his father, two brothers and an uncle for violating COVID-19 guidelines and levied a fine of Rs 50,000 on the hotel. Besides, the Regional Transport Office also impounded the vehicle in which the groom was going to the hotel, the report added.

Gajapati: Here a case was registered against a man who had invited no less than 1,000 people for his wedding on Sunday

“We have been running awareness campaigns on the necessity of avoiding any congregations that would lead to more infections. People need to understand that we are in a dangerous phase and any lapse would worsen the situation further,” Ganjam District Collector Vijay S Kulange was quoted as saying in HT.