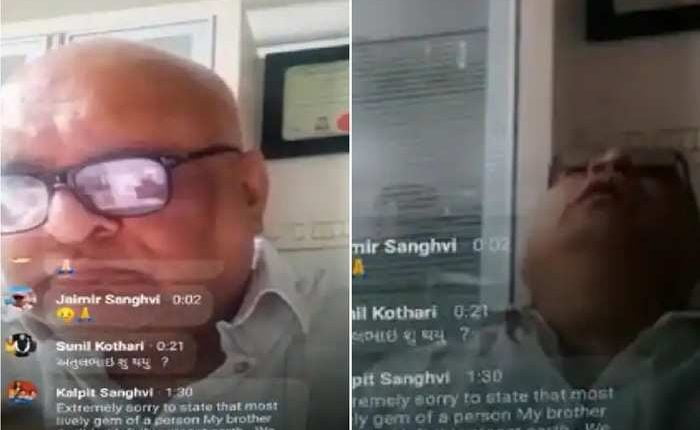 In a rare tragedy, a senior lawyer suffered a heart attack and died while he was singing live on Facebook.

Rajkot resident Atul Sanghvi was in his apartment, humming Hindi songs around midnight on Friday, The Indian Express reported. He was suddenly in distress, and those who had joined his live broadcast couldn’t initially make out what had happened.

It was only after his younger brother tried to resuscitate the lawyer and failed that they realized the worst might have happened.

In a video, Sanghvi, who had played a leading role in providing relief during the second wave of COVID-19 in the Gujarat city, is seen syncing with Mohamaad Rafi’s ‘Na tu jamin ke liye hain… na aasma ke liye’ played in the background.

While listening to the song and scrolling up and down on the screen of his gadget, Sanghvi’s eyes start turning upward and he starts breathing heavily. His son enters the room and asks him what the the matter was, but a gasping Sanghvi falls from his chair.

“I had noted that he was live on Facebook. Assuming that, as is his habit, he won’t go to bed before 2 am, I retired for the day. Hardly 15 minutes had passed when I received a call from my bhabhi (Atul Sanghvi’s wife), informing me that my brother had fallen down from his chair. I reached their apartment within five minutes but by that time he had a cardiac arrest. I tried to give him CPR (cardiopulmonary resuscitation) and everything, but it was to no avail,” Sanghvi’s younger brother Dr Kalpit Sanghvi, a homeopath who lives close by, told The Indian Express.

Dr Kalpit also informed that though his brother was obese, he had no other serious illness. “He was hale and hearty. But he was obese and had sleep apnoea. He died within five seven seconds,” he remarked.

Lawyer Claims Mehul Choksi Can’t Be Moved Out Of Dominica