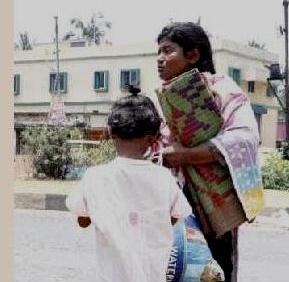 Jajpur: The unbridled love of a mother for her children knows no bounds. This was once again highlighted when a woman from Sundargarh walked over 400 km to trace her injured son in Cuttack.

According to reports, Anjali Kar (40), a widowed tea stall owner in Sundargarh town, received news that her 15-year-old son Sunil, who works in a circus troupe in Keonjhar, was seriously injured in an accident.

With no transport available due to the lockdown, the desperate mother walked all the way to Keonjhar along with her 7-year-old daughter.

After reaching Keonjhar, however, Anjali came to know that her son was taken to a hospital in Cuttack. So she again began walking towards Cuttack.

On the way, she was taking rest with her daughter under a tree near Barabati in Rasulpur block in Jajpur district when some locals spotted the exhausted duo. They immediately informed a local NGO Anshuman Trust.

The general secretary of Anshuman Trust, Himanshu Sekhar Sahu, and some members rushed to the spot. They took Anjali and her daughter to Jharka and provided food to them.

Talking to the media, Anjali said that on her way to Cuttack, she had approached five police stations for help. “But no one made any arrangement to take me to Cuttack,” she added.

The NGO then contacted the Dharmasala tehsildar, Saroj Kumar Panda, who gave permission to them to accompany the woman and her daughter to Cuttack.

Once in Cuttack, however, the woman was unable to trace the whereabouts of her son. IIC of Mangalabag Police Station, Amitabh Mahapatra, informed that police are on the lookout for the injured boy.