In Our Special Series, Odia Actress-Model Namrata Tells OB The Lockdown Has Been A Blessing In Disguise For Her

The coronavirus-induced lockdown has affected everyone in some way or the other, with most economic activities coming to a standstill.

The film industry has been hit hard as well. So much so that some, like Ollywood actress and model Namrata Parija, are exploring new avenues. Namrata has turned to acting and recently released her debut song ‘lage re aaji’, which became a huge hit with over 1 millon views.

Though things were difficult when the lockdown was announced two months ago, she now considers it to be a blessing in disguise.

“Initially things were a little problematic because we had a different life. But the lockdown helped me spend time with family, specially my father. We’ve been playing ludo and recalling so many fond memories of our younger days,” she says.

A PUBG lover, Namrata is happy she can play her favourite game without any time pressure. 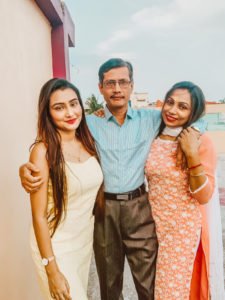 Now that she is working from home, she did brand endorsements with Daniel Wellington, Amazon, DW, Honda, Red Bull, Spotify and Renee Cosmetics.

She is very grateful to her parents for being supportive. “They may not have too much knowledge about all this, but have still helped me in every possible manner. They have even handled the camera for me,” reveals Namrata.

She is hopeful that the government will soon allow some relaxations in film industry.

She is also excited about another music video which is in the works. “I hope people will love that as well,” she signs off on an optimistic note.

Ordinance Will Not Undermine Autonomy Of Odisha Universities: Minister

What Kept Shah Rukh Khan Busy During Lockdown? Hear It From…