Mahatma Gandhi’s Statue Vandalised; Check Who Did It & Why 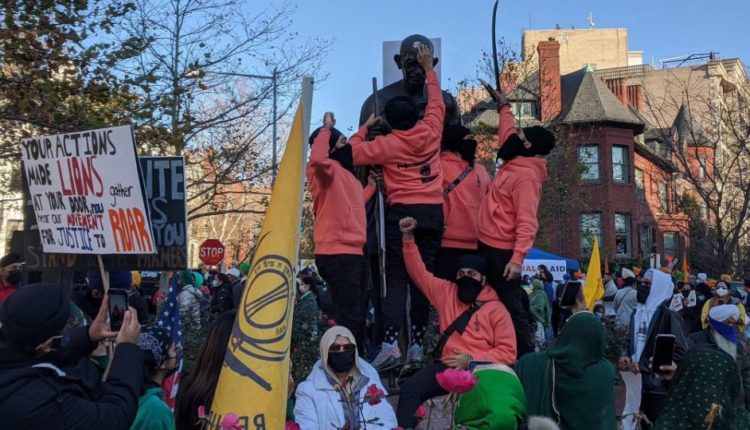 Washington: A statue of Mahatma Gandhi in front of the Indian Embassy in Washington DC was defaced by a group of Khalistani separatists who were purportedly staging a protest in support of farmers agitating against the recently enacted farm laws in India.

Hundreds of Sikh-American youths took out a car rally and headed for the Indian Embassy to express solidarity with the protesting farmers in India, The Indian Express reported.

The rally, however, was hijacked by separatist Sikhs who waved Khalistani flags and held anti-India posters and banners proclaiming ‘The Republic of Khalistan’.

A bunch of pro-Khalistan Sikh youths, flashing kirpans, jumped on the statue of Gandhi ji and pasted a poster over it.

That was not the end of the vandalism. Another group of Khalistani supporters arrived at the site sometime later and hung a picture of Prime Minister Narendra Modi with a rope around the neck of the statue.

Condemning the incident, the Indian Embassy said in statement: “The statue of Mahatma Gandhi at the Mahatma Gandhi Memorial Plaza in front of the Embassy was defaced by Khalistani elements on 12 December 2020. The Embassy strongly condemns this mischievous act by hooligans masquerading as protesters against the universally respected icon of peace and justice.”

The Embassy has lodged a protest with US law enforcement agencies and also urged the Department of State for an early investigation and action against the culprits.

The statue of Gandhi had been unveiled by then-Prime Minister Atal Bihari Vajpayee in the presence of then-US president Bill Clinton on September 16, 2000.