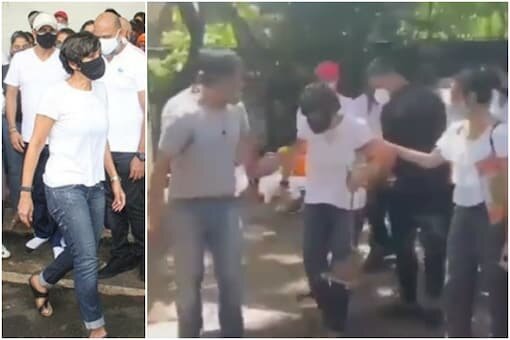 Mumbai: Filmmaker Raj Kaushal’s funeral after his untimely death due to cardiac arrest this morning was a somber affair. His wife Mandira Bedi, marked a new beginning in India by not only carrying her husband’s bier but also performing his last rites. Both the rituals are traditionally carried out by a son even if minor or a male member of the family.

Needless to say, Mandira is being lauded for her brave act of breaking gender stereotypes.

At Raj’s funeral, film celebrities and those close to the family had gathered to support Mandira in this time of need.

Onir paid tributes to Kaushal on Twitter. Gone too soon. We lost filmmaker and producer @rajkaushal1 this morning. Very Sad. He was one of the producers of my first film #MyBrotherNikhil. “One of those few who believed in our vision and supported us. Prayers for his soul, Onir wrote.

Unlock Odisha: Check What Will Remain Open In Cuttack & Bhubaneswar From Tomorrow

Confident Of Putting Up A Good Show In Tokyo Olympics: Dutee Chand