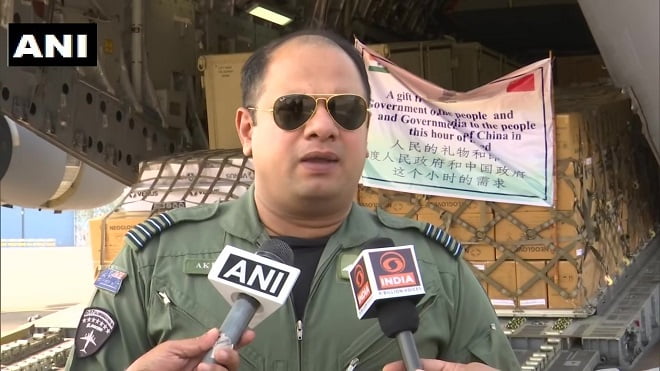 Among the many with whom Modi spoke on the day, Indian Air Force’s Captain AK Patnaik, who has played a major role in  transportation of empty oxygen tankers, oxygen concentrators and cryogenic tankers from foreign countries, came in for special praise.

Captain Patnaik stationed at Hindon air base thanked the PM for being given the opportunity. “We are fortunate to be able to help our countrymen during this time of need. Over the last one month, we have been continuously transporting oxygen. What took 2-3 days is now happening in 2-3 hours. Even international operations are being carried out around the clock. We have flown to Singapore, Dubai, Belgium, UK Germany on very short notice,” the IAF officer revealed.

Captain Patnaik said the Air Force has completed more than about 1600 sorties and flown more than 3000 hours. “We have completed nearly 160 international missions; due to which, from all places, oxygen tankers from domestic destinations which earlier took two to three days, can now be delivered from one place to another in two to three hours; in international missions too within 24 hours by doing continuous round the clock operations… Entire Air Force is engaged in this so that we can help the country by bringing in as many tankers as soon as possible,” the captain said.

Patnaik’s 12-year-old daughter Aditi also had a brief interaction with the Prime Minister. She said she feels proud of her father but she also missed him as he spent a lot of time away from his family transporting oxygen.

“All my friends are feeling proud of my father… my mother and her doctor colleagues are also working day and night… and all the Armed Forces,  are working quite a lot….and I am sure that with everyone’s efforts, we will definitely win this battle against corona. We will be able to overcome this crisis,” the Class 8 student told the PM.

To this, Modi replied, “When a daughter speaks, we consider it as Goddess Saraswati speaking. And now that Aditi says we will overcome this crisis, we definitely will.”

Untouched By COVID-19, These Odisha Villages Set An Example