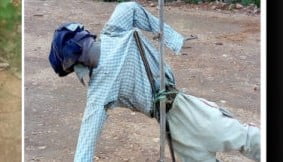 Bhubaneswar: The Maoists are using new methods of attack, which can also be a threat for Odisha where two contractors were killed on suspicion of being police informer in past couple of years.

On Monday, CRPF jawans had recovered bombs hidden inside two scarecrows near their camp at Kondabalasa near Dantewada in Chhattisgarh and managed to diffuse them.

The bombs were planted in such a way that it would go off if anyone touched the scarecrow, according to media reports.

People in Chhattishgarh have died in similar traps in the past.

On Sunday, a group of armed Maoists arrived at Duguriguda village here late on Sunday and took away contractor Bhima Bora from the camp. Later, they shot him dead on the outskirts of the village.

The body of the contractor was found lying in a pool of blood by the villagers on Sunday morning.

The Left-wing ultras had shot dead another contractor Rajendra Sahu at a weekly haat at Malipada under Bijepur police limits in the broad daylight on Saturday.