HeartFeltFeatured
By Elisa Patnaik On Nov 30, 2021 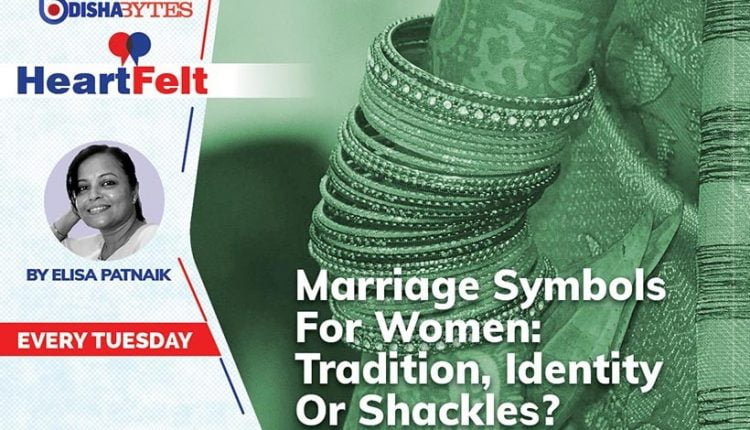 It was more than a decade ago and I was travelling in a bus from Bhubaneswar to Puri for a work assignment. A middle-aged lady sitting next to me began chatting and though I wasn’t keen for a conversation, I politely answered her questions. Upon knowing that I was married, and that too to an Indian Army officer, she was visibly aghast. She literally screeched at me, “But why haven’t you applied sindoor and wearing bangles?” Her voice soon turned to a whine, “Think of your husband fighting at the borders…you should at least wear sindoor for his safety and long life!” I was both incensed and stunned. “What has my wearing sindoor and bangles got to do with my husband’s long life?” I retorted adding, “moreover, it’s none of your business.” Needless to say, the lady took this as an affront and shifted to another seat.

I was hoping things would have progressed in the past couple of years, but I suppose not much has changed since then. Just the other day, a young colleague who has recently married narrated how her mother-in-law reproached her for not wearing the customary red bangles saying, “are you trying to kill my son?”

During the course of my 20-plus marital life, I must have been asked umpteen times by complete strangers and acquaintances why I have not sported the mandatory sindoor, bangles or toe ring after a thorough head-to-toe assessment. Some even try to comment under the veil of a compliment, “you hardly look married.”

Sindoor in the parting of hair, mangalsutra on the neck, particular bangles and toe rings – are among the most common markers signifying that a woman is married. And all such tokens of marriage have strong explanations and validation through long years of practice and validation.

Millions of married women begin their day by applying sindoor on their heads. It is supposed to symbolise the husband’s long life and also the wife’s way of showing her devotion to him. Certain kind of bangles like the sakha polla, red glass bangles, chuda etc. are usually worn by married women only. In many Indian families, married women are not supposed to leave their forearm empty failing which may lead to misfortune for the husband. The mangalsutra, one of the most visible and important symbols of marriage, is considered to protect the marriage from dangers and evils. The toe ring or the bichiya is again considered to protect the husband’s sound health and to bring financial prosperity to the family.

All the justifications, mind you, are only for the husband’s wellbeing or to protect the marriage. None are for the benefit of the woman herself who is sporting it. However, there are several ‘scientific’ explanations on how wearing these symbols are supposedly beneficial for women. While the sindoor application is supposed to “activate the pituitary gland,” wearing bangles is considered to enhance blood circulation. The toe ring, based on principles of acupressure, is believed to “regulate menstrual cycles and to ensure a healthy uterus.” The mangalsutra due to the presence of black beads and other metals is supposed to stimulate blood circulation and ward off negative energy.

Women indeed look beautiful in their wedding finery and in their marriage get up. And there’s nothing right or wrong about adopting these practices and wearing the marriage accoutrements. But to equate women’s adornment of prescribed marriage symbols thereafter to a good and abiding marriage, and not being given a choice to decide about it is – regressive, discriminating, and deceptive.

More importantly, why does only a married woman have to look married and a married man doesn’t? There’s no way that we can distinguish a man as married, unmarried, single or as a widower.

Does women’s marital status really need to be announced and displayed? Even if she is a professional woman or a homemaker, is her choice considered whether she wants to wear a talisman or none at all? Women are often designated as the custodians of culture and family traditions in which symbols play a big role. While for some women, it is adhering to prescribed customs and feeling left out not being part of it, for others it is a matter of pride and not sporting any of it feels like an inauspicious thing.

Since earlier times, patriarchy determined that marriage symbols for women are to imply that a married woman belongs to another man. Moreover, in many Indian homes, a girl and a young woman are often groomed to become a wife and they are conditioned to be the keepers of marriage. So, along with the marriage symbols, other rituals are propagated, glorified practised for the husband’s long life. But sadly, no such rituals are performed for women.

Also, patriarchy conditions women to internalise, accept and glorify such symbols and practices and makes them feel ‘good and ‘virtuous.’ Those who question or do not accept such rituals and practices are branded commonly as brazen, ‘too smart’ or depraved. Eventually, for most women, it is taken for granted that they wear these symbols of marital status.

There’s immense family and societal pressure on women to adhere to such norms and conform to the role of the ‘good wife’ not just in action but also in appearance. Women who refuse to conform are always looked down upon and are constantly reminded of it. I have heard my friends and colleagues narrating that they wear them just to get away from the tedious questioning.

Occasionally, the issue leads to serious conflicts. For example, the Nagpur bench of the Bombay High Court in 2014 ruled that not wearing a mangalsutra wouldn’t be considered grounds for divorce. The husband had asked for a divorce because his wife wouldn’t wear a mangalsutra or sindoor sometimes.

On the other hand, in another case, the Gauhati High Court ruled that a woman who refused to wear sindoor meant that she ‘refused to accept her marriage’ and therefore granted her husband’s request for divorce. But there was no such conclusion on how the husband accepted his marital status. After the controversial ruling in June 2020, there was an outpouring of posts under the hashtag #WithoutSymbolsOfMarriage, with couples posting pictures of themselves without the symbols of marriage.

Many of my friends and family members share how easy it is to be accepted as a mature and conventional lady by sporting sindoor and bangles. Other young women have shared how they are thought to be more ‘serious’ and ‘mature’ when they sport a married look. My cousin who is a doctor working in the state health department and posted in a sub-urban hospital says that with the married look, her patients and other male colleagues consider her as “more dependable and experienced and do not create any problems.”

Some even believe that that the married look protects women from harassment as men hesitate to mess around with married women.  So, women end up wearing the markers to avoid facing unruly judgements or for the fear of being socially stranded.

Just because a woman does not wear any overt symbols of her marital status, in no way means that she considers the marriage insignificant, is disrespectful towards it or is disloyal. Also, the choice to wear or not wear is certainly not a yardstick to judge or measure a woman’s character. A marriage fraught with incompatibility, unhappiness, mental or physical violence and disrespect can no way be saved, no matter how many such symbols are displayed or rituals practised.

It’s not just our families and society, but the media and popular culture has also perpetuated these norms as the most glorious symbols that woman aspire to achieve. Umpteen Bollywood movies have glorified the sanctity and power of the sindoor, mangalsutra and sadhaba or suhagan (a blessed married woman whose husband is still alive). The vamps, adulteresses and the purported ‘home breakers’, even if married, are usually in western attires without sporting any marriage talisman. While the chaste, sacrificing, and devoted wife is sure to sport a flaming red sindoor, a prominent mangalsutra and a wrist full of bangles.

The imagery of a married woman vis-a-vis unmarried and a widow is stark and distinct in our minds and culture in which these symbols play a prominent role. I truly despise the way women without their husbands are prohibited from sporting any of these markers announcing to the world that, ‘look I am nothing without my husband.’ Once widowed, the sindoor is smeared off the woman’s forehead and parting, the mangalsutra taken off and her coloured bangles broken or taken off to signify that her husband is no more. In traditional households, she is never allowed to wear bangles or the red bindi ever again. Even the body of a woman who dies with her husband still alive is adorned with sindoor and other jewellery.

Though there are certain customs and emotions and attached to these symbols, setting them as benchmarks of true womanhood not only reinforces patriarchy but is also fallacious. More and more women are voicing their opinions to take control of the narrative surrounding these symbols and to adopt these as a matter of choice.

Marriage is a commitment between two individuals based on mutual love, respect and understanding. It is certainly much more than just these artefacts and customs which hold only women accountable for the wellbeing and longevity of a marriage.