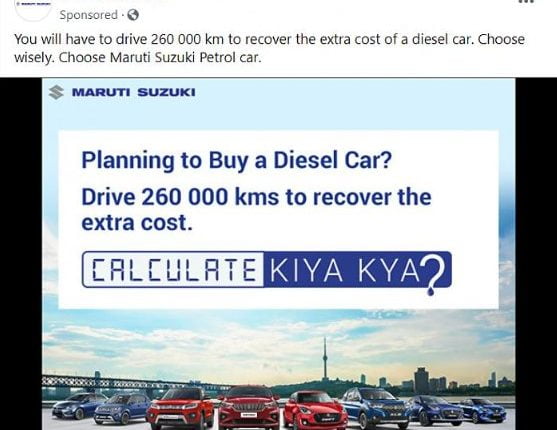 New Delhi: Maruti, the one-time highest seller of diesel cars in India, has taken a U-turn and is advertising against diesel costs. A recent ad by the company reads “Drive 2,60,000 km to recover extra cost”.

This doesn’t come as a surprise as Maruti has removed all its diesel options post BS6 norms. While competitors have removed diesel options in small cars, most have upgraded their bigger engines to BS6 levels.

Typically, diesel cars cost around a lakh more than its petrol counterparts. Of late, the difference between petrol and diesel fuel costs have narrowed down. However, exact costs vary from model to model and on efficiency.

Prior to BS6, Maruti had one Fiat-sourced 1.3-litre diesel engine which was predominantly used in all its diesel cars. This engine had been nicknamed “India’s National Engine” because of its popularity.

Twitter users have been quick to point out that this is hypocrisy on Maruti’s part which was minting money from its diesel sales just a while back.

Not Possible To Bring Petrol, Diesel Under GST In Next 8-10…

Rising Fuel Prices: How Much Can You Save By Converting Your…