‘Maza Nahi Aaraha…’Resignation Letter; Is It Evocative Of A Larger Public Sentiment? 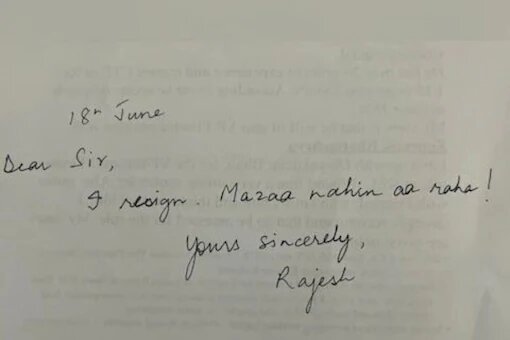 New Delhi: A picture of a resignation letter gone viral is evocative of job dissatisfaction in the market. It also, in a way, validates a recent report that 86% of employees may resign from their jobs in the next six months.

According to the research by Michael Page, almost 61% of employees in India would rather accept a lower salary and even forgo a pay rise and/or promotion for better work-life balance, overall well-being and happiness.

This person’s one-line resignation will resonate with many out there who are dying to leave their jobs.

The image, shared by industrialist Harsh Goenka, was written by a person called Rajesh in the office. Goenka shared the viral picture of the resignation written on paper.

The image shared had a caption as well which says “This letter is short but its meaning is very deep. This is a serious problem that we all have to solve.”

In the resignation letter, Rajesh wrote “Dear sir, I resign, I am not enjoying it.”

Many think that the letter is written by industrialist Harsh Goenka and he also replied to one of the comments. The post has garnered more than 2k likes and many retweets.

This letter is short but very deep. A serious problem that we all need to solve… pic.twitter.com/B35ig45Hhs