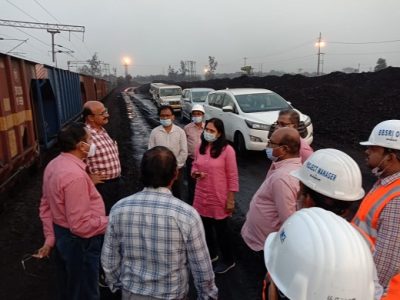 Bhubaneswar: In order to meet the acute coal shortage in thermal power plants, the Mahanadi Coalfields Ltd (MCL) in Talcher of Angul district has been asked to raise its daily despatch.

Santosh, Deputy Director General and CCO, Ministry of Coal, who is on a three-day visit to the state, on Thursday said concerted efforts should be made to ensure despatch of 60 to 65 rakes from Talcher coalfields to meet the demand of coal. She appreciated the efforts of MCL in achieving a record off-take on rail route from Talcher coalfields.

Santosh, who had arrived on October 12, visited various railway sidings and the first mile connectivity (FMC) projects of the MCL in Talcher coalfields and also held meetings with various stakeholders.

The MCL had recently despatched 62 rakes in a day. On Wednesday, the company despatched more than 5.44 lakh tonne of coal for the second time this month. It has supplied over 87.5 million tonne of coal to consumers during the current financial year, which is 20.3% more than the supply during the same period last fiscal.

At present, the MCL has more than 13 million tonne of coal available in its stocks.