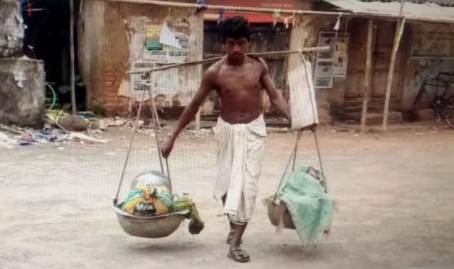 Baripada: The distress and helplessness of migrant workers continue unabated with the latest case coming from a Mayurbhanj village where a man reached covering 250 km on foot.

The daily wager, Rupaya Tudu along with his family had gone to Cuttack to work in a brick kiln some time back. After the lockdown was clamped, the kiln owner stopped the work and refused to give him the wage dues.

Left with no work and nobody to turn to, Tudu decided to return home. Unaware of the train and bus facilities extended by the government to migrant workers, he decided to cover the 250-km distance from Cuttack to his village Baladia under Morada block in Mayurbhanj district on foot.

Since his children could not walk so long a distance, he carried them on two slings suspended from a bamboo yoke and reached Baladia on Saturday.

Talking to mediapersons, Tudu said, “As I had not enough money, I decided to return to my village on foot. We left Cuttack a week ago with my wife Matrika, two daughters Pushpanjali (6) and Sita (4) and two-and-a-half-year-old son Megharay. As it was not possible for Sita and Megharay to cover the distance, I carried them using a bamboo yoke,” he said.

He said though he and his family were kept in a temporary medical camp (TMC) in his village, there is no provision of food for them.

Following information, former Mayurbhanj district BJD president and former chairperson of the Odisha Agro Industries Corporation Debashish Mohanty arrived at the TMC and made arrangements to provide food and ration Tudu family and other workers staying there. He also assured of food to all TMC inmates for their entire quarantine period.