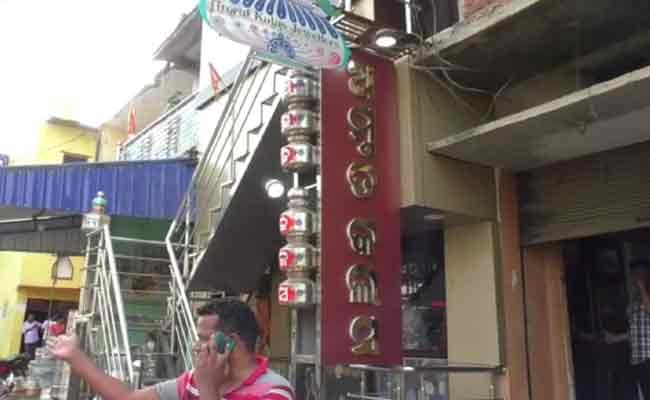 Balangir: Armed miscreants looted more than 1.5 kg of gold jewellery from a shop in Odisha’s Balangir district on Friday afternoon.

According to police sources, the owner of Amrut Kalas Jewellers, Mukesh Jain opened his shop, nearly 200 metre from the police station, at Ramjipara in Patnagarh town in the morning. There was no untoward incident till afternoon.

At around 4 pm, six persons came on bikes to the shop and told the staff to sit down pointing guns at them. As they sat down in fear of life, one of the dacoits hit Mukesh on the head with the butt of the gun, leading to his bleeding.

The miscreants then took out gold jewellery weighing more than 1.5 kg from the shelves, Rs 40,000 from the cash counter and fled on their bikes. While leaving the looter took away the hard disk of the CCTV camera inside the shop.

On being informed, a team from Patnagarh police station rushed to the spot and started investigation after Mukesh filed a complaint regarding the loot.  The identity of the miscreants has not been established yet.

How Can Urban Solid Waste Be Managed?