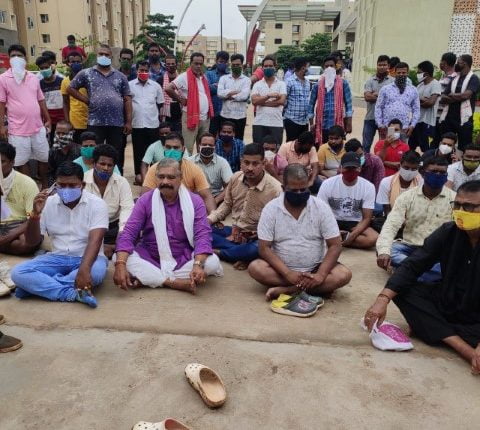 Bhubaneswar: Congress MLA Suresh Routray, the people’s representative from Odisha’s Jatni Vidhan Sabha constituency, raised eyebrows when he and his supporters staged a dharna in the premises of a private hospital here on Monday following the death of a patient at a COVID hospital.

The Congress MLA was not wearing a mask in a blatant violation of COVID guidelines by him and his followers at such a sensitive place.

According to reports, a man from Routray’s constituency was admitted to the private hospital in critical condition and subsequently tested COVID positive. He was shifted to a COVID hospital, where he breathed his last during treatment.

Routray and his supporters alleged negligence in treatment on the part of the private hospital.

Patients and their attendants in the hospital expressed their annoyance and resentment over the MLA’s irresponsible action, which compromised the lives of critical patients.

As per the state government’s guidelines, there can’t be a gathering of more than 10 people at public places. Also, wearing of mask is mandatory.

Routray and his group called off the dharna after the hospital management intervened, but have threatened to resume the protest if their demands were not met by Tuesday.