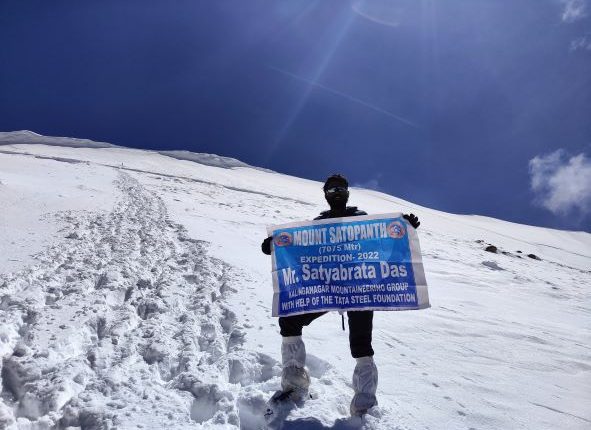 Satyabrata Das, from Kumbhiragadia village under Danagadi block of Jajpur district, was among five mountaineers who scaled the peak from a group of eight who were part of the expedition organized by Indian Mountaineering Foundation.

Nestled at an elevation of 7075 metres above sea level, Satopanth expedition is a formidable challenge because of its uneven terrains passing through knife-sharp edges of the Himalayas and extreme weather conditions.

The expedition, which began on August 10, took three weeks to be completed.

“The temperature went up to -30 degrees Centigrade and, at times, it became unbearable. We had to use a lot of critical techniques to find our way out. The conditions were tough, but we were determined. I am confident that now I can scale higher altitudes than this. The feeling of hoisting the National flag at the peak was exhilarating,” said Satyabrata.

Tata Steel Foundation’s initiatives have encouraged a number of youngsters from in and around Kalinganagar to take up mountaineering seriously.

Since 2009, when the Foundation approached a young group of people from Jajpur to take up mountaineering as an engaging activity, over 1000 youngsters from the area have been trained in various mountaineering courses through Tata Steel Adventure Foundation.

Satyabrata and like-minded youths from the region have formed the ‘Kalinganagar Mountaineering Group’ that regularly organizes expeditions to nearby hills of the district and creates awareness on mountaineering among local communities.

Tree Ganesh Back In Bhubaneswar Park