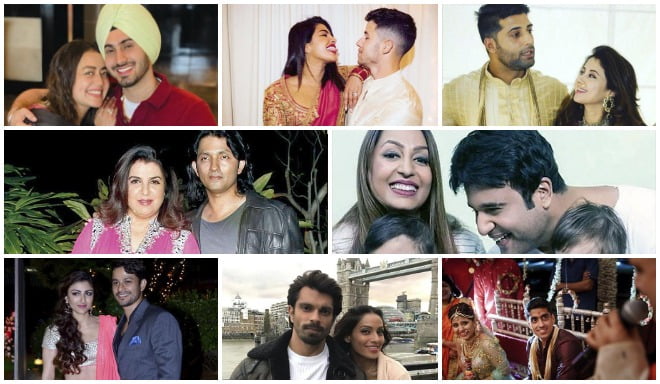 As is often said, “Age is just a number, not a state of mind.” Some men have proved it right by falling in love with women who are much much older to them.

Breaking all stereotypes and societal norms, where a man is programmed to marry younger women, the following celebs have turned the tables by marrying older, independent women:

1. Neha Kakkar & Rohanpreet Singh: Neha is 32 and Rohanpreet 25. After dating for a couple of months, the duo walked down the aisle and left tongues wagging because of the age gap.

2. Nick Jonas & Priyanka Chopra: While Nick is 28, Priyanka is 38. The age gap of ten years couldn’t stop the couple from falling head over heels in love with each other. Till date, the couple is going strong and will be ringing in their second anniversary soon.

3. Urmila Matondkar & Mohsin Akhtar Mir: Urmila is 44 and Mohsin 33. When Urmila announced her wedding to Mohsin, people started making fun of the couple. But the duo silenced critics with their strong bonding.

5. Archana Puran Singh & Parmeet Sethi: Archana is 58 and Parmeet 51. Despite the seven-year age difference, they hit it off.

6. Shweta Tripathi & Chaitanya Sharma: Shweta is 32 and Chaitanya 27. When asked about their age gap, Shweta said, “You don’t fall in love with things like height or age. He is 6 ft tall and I am 5 ft.”

7. Kashmera Shah & Krushna Abhishek: Kashmeera is 48 and Krushna 37. Despite opposition from his family, Krushna chose to marry Kashmeera, who is 11 years older to him.

8. Kishwer Merchant & Suyyash Rai: Kishwer is 39 and Suyyash 31. Their love story became popular on the reality show ‘Bigg Boss’. Soon after coming out of Bigg Boss house, they decided to tie the knot.

9. Soha Ali Khan & Kunal Kemmu: Soha is 39 and Kunal 35. Besides the age gap of 4 years, the couple overcame religious barriers to choose each other as life partner.

10. Bipasha Basu & Karan Singh Grover: While Bipasha is 39, Karan is 35. The couple has been married for four years now and is reportedly planning to adopt a child to complete their family.

Mahindra To Deliver 1000 Units Of Thar This Diwali

Priyanka Chopra Gets A New Tattoo; Guess Who It’s Dedicated…

Priyanka Chopra’s Next Bollywood Movie In 2022