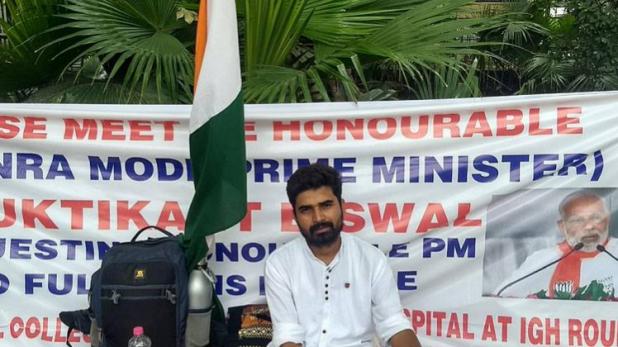 Bhubaneswar: Young social activist Muktikanta Biswal, who walked all the way to Delhi from Rourkela to remind Prime Minister Narendra Modi of the promises he had made during his maiden visit to the Steel City, has embarked on another padyatra to Bhubaneswar to meet the Chief Minister to raise his demands.

He has been demanding the upgradation of Ispat General Hospital (IGH) to a super specialty hospital and a second bridge over the Brahmani river in Rourkela.

“I will meet Chief Minister Naveen Patnaik and some BJD leaders to raise various demands, including super specialty hospital status to IGH. I will also discuss about the construction of a second bridge over the Brahmani,” he told the media.

Muktikanta, 30, decided to meet the PM to remind him of his announcement and started walking to Delhi on April 16. He managed to cover about 1,350 km on foot before he fainted on the highway and was admitted to a hospital in Agra on June 27. When he recovered, he continued his journey.

On reaching Delhi, Muktikanta first met Union Tribal Affairs Minister Jual Oram, seeking his help to meet the PM. But Oram said there is no need to meet the PM as the construction work for the second bridge had already started and work for super specialty in the burns and plastic surgery department of IGH initiated.

Meanwhile, Muktikanta was taken into custody by Delhi Police for sitting on a hunger strike near Jantar Mantar.

However, he failed to meet Prime Minister Narendra Modi and returned to Rourkela on July 8.

The King Who Brought Shaivism To Odisha