New Project India: It Would Be Meaningless Without Reconciliation

The old, overarching vision of India is collapsing. It is too early to judge whether it is for good or bad. 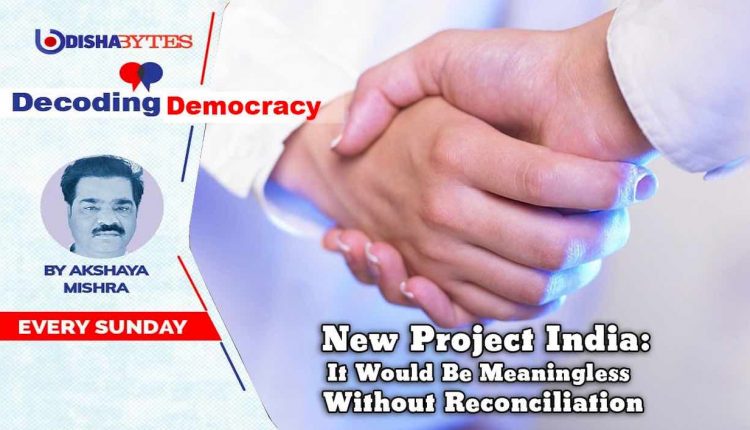 It was a construct powered by the intellectual wavelength, clarity and integrity of the elite of the Independence era. It was an ambitious, long-term project drawing strength from modern education, contemporary global influences and the interpretation of the many weaknesses of Indian society on the basis of both. Perhaps their scale of ambition
was too high. From a country with deep social and economic divisions within and from a people steeped in feudal experiences, quick adaptation to modern values and institutions core to democracy was an impractical expectation.

Such a project required the zeal and dedication of many generations to succeed. It was the responsibility of the succeeding elite to carry the work forward and strengthen as well as deepen it. They managed to vandalise it through collective apathy over decades instead.

“Democracy in India is only a top-dressing on Indian soil which is essentially undemocratic,” wrote Dr BR Ambedkar, Father of the Indian Constitution, in one of his books. He said the morality of the Constitution was not a natural sentiment. It had to be cultivated because our people were yet to learn it. The top dressing has eroded over time thanks to self-serving politics and the contempt culture among the elite. We stand at a point where all pillars of democracy stand discredited, and their moral hollowness lay exposed.

In the earlier part of this series, we have already discussed the gradual alienation of the masses from institutions and the general widespread antipathy towards the ruling elite. The anger and reverse contempt visible everywhere is a reaction that was not out of place given this backdrop. The problem now, however, is the apparent absence of a new goal or roadmap for the country or any hint of course correction. What the new elite would peddle us as vision is not quite so. So far it’s a mass of confusion the core of which is grudge and anger. It is yet to coalesce into something with clear contours. Here we need to highlight the fundamental difference between the two visions, and what could be
in-store.

The old vision was driven by lofty idealism, typical of countries achieving freedom after a long period of darkness. It drew its idea of India from the positives offered by its turbulent history. Assimilation, adjustment, syncretism, compromises and the presumed goodness of Indians constituted an important part of the narrative around it. It sought to ignore the raw nerves and live wounds of the past with the belief that time and progress would heal them somehow. Of course, that has not happened much. The new one draws its essence from the negatives of history: conflicts, collective hurt of several kinds, mutual distrust, unaddressed grievances etc. It thrives on the idea of revenge. Enemies have to be discovered or created on a constant basis to keep them energised. It never shied away from exposing the ugly reality of India the early idealists sought to sweep under the carpet.

Both have weaknesses. The important question here is which one is more capable of doing justice to Project India better. The first one was undone by the hypocrisies of those who were supposed to carry it forward; the second one appears to have nothing to carry forward.

The reality of current times is more Indians hate Indians than ever before, more Hindus hate Hindus than earlier. The proof comes easily from everyday discourse. The new-found pathological dislike of Muslims, Christians and some other non-Hindus among the majority automatically excludes these communities from the larger project. If the idea is a Hindu nation, then the lack of trust within is far too glaring. There are fissures of all kinds: national vs anti-national, community vs individual, intellectual vs non-intellectual, caste vs caste, Left vs Right, liberal vs conservative, creative vs non-creative, pro-woman emancipation vs anti-woman rights, migrants vs non-migrants and so on. We don’t know what more would come up at different times. The intensity of the hatred spewed in the public sphere is an indication that Hindus could be getting alienated from each other more than any time in recent history.

The new Project India harps on the centrality of Hindu identity to nation-building yet it would make no effort to bind the community together and project it as a cohesive entity. This is intriguing, and ironic as well. Intriguing because it is difficult to imagine a robust Hindu nation with more points of convergence in the community than points of divergence; ironical because the very forces that insist on Hindu identity are the ones causing great harm to it by pitting Hindus against Hindus. If to an outsider the community looks hopelessly divided and bereft of any understanding of itself, it is no different from how foreign invaders saw it in medieval times.

Coming back to visions, the country has to discover a new one which is neither over-reliant on high idealism nor too engrossed in fracturing itself. It has to be more than a short-term political project. Is there a way out? To begin with, beyond all differences Hindus must treat other Hindus as their own. Any vision is bound to fail without it.