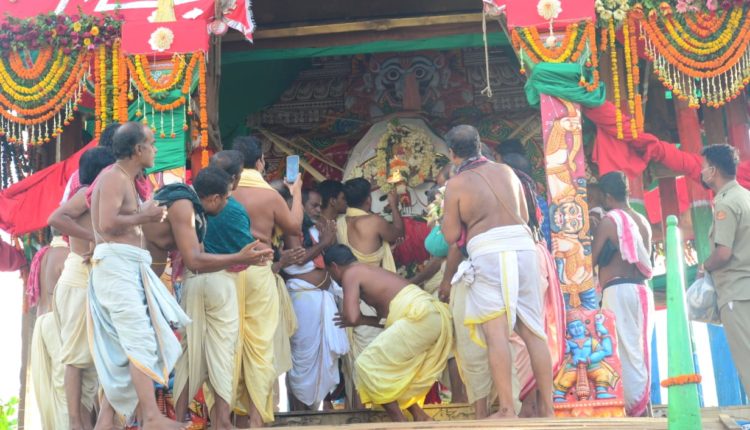 Puri: With Lord Jagannath and His siblings set to return to their abode today, rituals in the run-up to ‘Niladri Bije’ have started on the chariots in Puri.

‘Niladribije’ is the last part of the annual Rath Yatra of the deities, Lord Jagannath, Lord Balabhadra and Devi Subhadra. On this day, the Lords enter the sanctum sanctorum to take their seats on the ‘Ratna Sinhashan’.

According to Puri collector Balwant Singh, Niladri Bije rituals are scheduled to begin at 4 pm, while Pahandi will start by 5 pm. All the rituals are expected to be completed by 10 pm, he added.

As per the tradition, the deities will be carried by the servitors in ‘Goti Pahandi’ to the temple after ‘Sandhya Dhoopa’.

After the Lords returned from Gundicha temple, the rituals of ‘Suna Besha’ and ‘Adhara Pana’ were performed on the chariots.

The servitors were performing “Mangala Alati’ when the report was filed.

This year, the Rath Yatra was organised without participation of the devotees on the Supreme Court’s order due to COVID-19.