‘No Shame At All’: Bharti & Haarsh Trolled For Attending Aditya Narayan’s Reception

Mumbai: It seems netizens are in no mood to forget and forgive comedian Bharti Singh and her husband Haarsh Limbachiyaa, who post their arrest in a drug-related case.

Even though the magisterial court has granted bail to Bharti and Haarsh, the celebrity couple is still being attacked on social media platforms.

Bharti and Haarsh were spotted having a nice time at singer Aditya Narayan and actress Shweta Agarwal’s wedding reception on December 2.

This didn’t go down well with the haters, who took to social media to shame Bharti and Haarsh for enjoying themselves at the party.

When a video of the couple from the reception was shared on social media, one user commented, “Nashe se chadh gyi.”

“Looks like they have won an award looking at their face charm,” posted another.

“No shame at all and it’s a mockery of Indian law n justice,” wrote another user.

Here’s how the haters reacted: 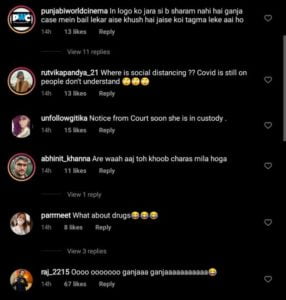 Earlier this week, the NCB team moved the special NDPS court challenging the bail order passed by the magisterial court.

NCB has also demanded the custody of Haarsh for interrogation in the drugs case.

The special court has issued a notice to Bharti and Haarsh in the case, with the hearing scheduled for next week.