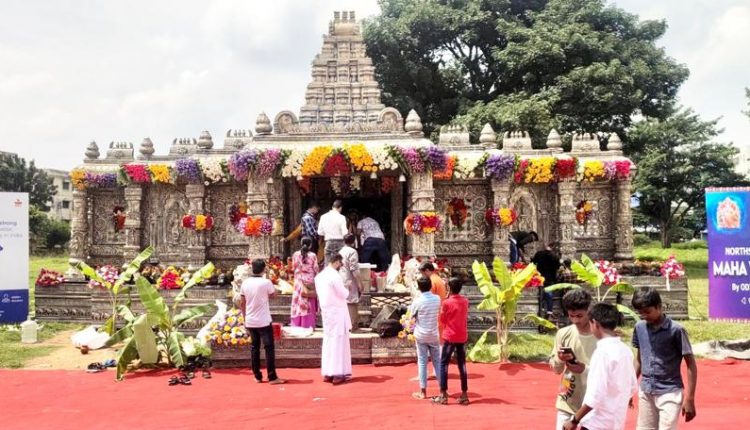 Bengaluru: The members of Non-Resident Odias (NROs) in Bengaluru celebrated Ganesh Puja with pomp and grandeur.

Odisha Puja Committee (OPC) organised the 28th Mahavinayak Mahotsav at M Visvesvaraya College Ground. An aesthetically and elegantly decorated puja pandal in the shape of a South Indian temple was set up at the ground. Around 20,000 Odia and non-Odia devotees from the garden city and nearby areas participated in the puja.

Since the Ganesh Puja was being celebrated offline after a gap of two years due to COVID disruptions, enthusiasm and excitement were marked among the members and volunteers of OPC.

The main attraction of the festival was the colourful cultural Jamboori entitled “Star Night” presented by actors of Ollywood. The highlight of the show this year was the stage performance of actor Babu Shaan along with his Daman movie team and actress Elina Samantray.

The noted singers who enthralled the audience by their several scintillating musical numbers included Kuldeep Pattnaik, Archana Padhi and Navya Jaiti. Famous comedians Madhusudan Mishra and Pritiranjan Pradhan were at their elementary best with their humorous oratory skills.

The Raja Queen Rupali Pani was warmly greeted with cheers by the viewers for her exceptional accomplishments. Anchor Jyotsna Priyadarshini presented the cultural session in a seamless manner. Around 7,000 devotees took prasad prepared by cooks brought from Odisha.

The idol of Lord Ganesh was taken in a procession to Ulsoor Lake and immersed there on Thursday.

INS Vikrant, Made In India: Steel From Odisha To Electrical Cables From Kolkata…