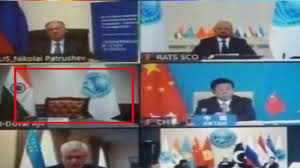 The map, used as a background for Pakistan’s representatives, showed Indian territories as part of their country at the virtual meet. This was a violation of norms. As a mark of protest, Ajit Doval with the team chose to leave the meet.

“The Pakistani NSA deliberately projected a fictitious map that Pakistan has recently been propagating. This was in blatant disregard to the advisory by the host (Russia) against it and in violation of the norms of the meeting,” said foreign ministry spokesperson Anurag Srivastava in a statement.

After consultation with the host, the Indian side left the meeting in protest at that juncture. “As expected, Pakistan then went on to present a misleading view of the meeting,” the statement read.

On August 4, Pakistan Prime Minister Imran Khan had released a map showing the territories of India, Jammu and Kashmir, Ladakh, and Sir Creek in Gujarat as parts of Pakistan.

Government sources said Islamabad’s use of the fictitious map, depicting sovereign territories of Indian as part of Pakistan, is a blatant violation of the SCO Charter. It is also against its established norms of safeguarding the sovereignty and territorial integrity of SCO member states.

According to media reports, the Russian side, as the Chair, had tried very hard to persuade Pakistan not to do so. Russia does not support what Pakistan has done and hopes that Pakistan’s provocative act will not affect India’s participation in SCO, sources said.

Over the last year, Pakistan has been attempting to highlight Kashmir at most international fora. But showing such a map in violation of protocol became possible as the meeting was organised virtually owing to the COVID-19 pandemic.

Indian Army ‘Fully Prepared’ For War Against China, Even In Winter Months

Respond To Pleas For Recognition Of Gay Marriages In 4 Weeks: SC To Centre