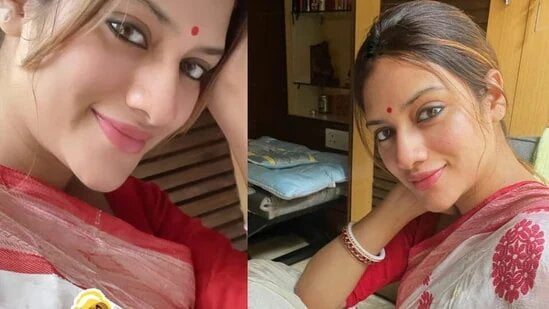 New Delhi: Actor-politician Nusrat Jahan was seen wearing a shakha pola, worn by married Bengali women in a Vijaydashmi Instagram post she shared on Friday. Nusrat was wishing her fans on the occasion.

Sharing the picture, Nusrat wrote, “Shubho Bojoya’r Priti Shubechcha O Abhinandan (Best wishes and congratulations for Shubh Vijaya).” She is seen in a white and red sari, complete with a red bindi on her forehead and red and white bangles in her wrists.

Nusrat and Yash had earlier shared pictures from a festive photoshoot and from their visit to a Durga Puja pandal. She was seen sitting on Yash’s lap in a picture.

Nusrat, who had given birth to a baby boy in August and named Yishaan had grabbed headlines by keeping the name of the baby’s father a secret. He is yet to announce marriage with partner Yash Dasgupta. but has dropped subtle hints about tying the knot with him.

Nusrat had recently shared a glimpse of Yash’s birthday celebrations which included a cake with ‘husband’ and ‘father’ written on it. On the topic of having a baby ‘out of wedlock’, Nusrat had told a leading daily, “Do people know whether or not it’s out of wedlock? Just because we don’t open up on things doesn’t mean whatever they are saying is true.”

On being asked about her and Yash’s marriage, she had said, “Like Yash said, we won’t hold placards and declare everything. Let that ambiguity stay,” she said.

Earlier in 2019, Nusrat had tied the knot with businessman Nikhil Jain in Turkey. In June, she said that since their marriage was invalid under Indian laws, it could only be called a live-in relationship.

Daily COVID Cases Fall Below 400 in Odisha, No Cases In 7 Districts

Know The Others Who Were Onboard IAF Chopper Along With Gen Rawat, Wife