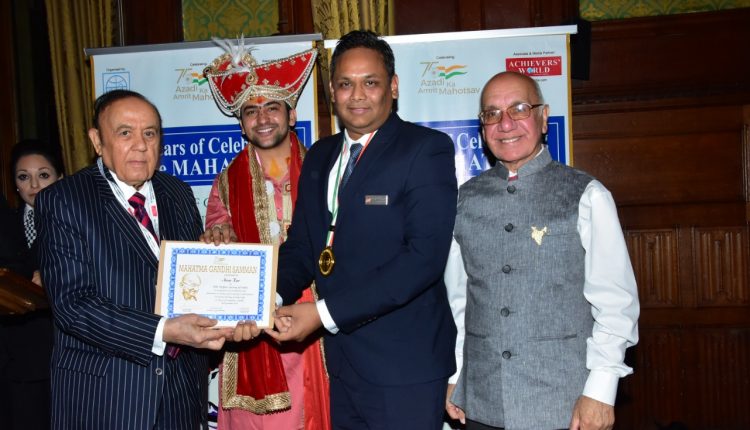 Bhubaneswar: The UK-based Odia entrepreneur and military veteran, Arun Kar, has been honoured with “Mahatma Gandhi Samman” at the House of Commons, British Parliament, London.

Arun was awarded at a function organised to commemorate the 153rd birth anniversary of Mahatma Gandhi. The event was attended by senior MPs and Lords of the UK Parliament and business tycoons worldwide.

An eminent achiever, Arun has made a place for himself in his entrepreneurial journey of innovations. He has achieved excellence in diversified fields like Information Technology and Environmental Sustainability. He has also contributed to boosting bilateral business engagements between India and the UK.

Speaking on his success, Arun said, “I am privileged to be surrounded by smarter people, because smart people make you smarter. They make you better. They spark interest and introduce you to new concepts, ideas, cultures and people.” He gave the credit for his success to his parents Dr Manoranjan Kar and Rashmi Rekha Kar, his wife Nidhi Kar, his business partner Chintan Panara and his company Xpertnest.

For his innovations, the Odia tech entrepreneur has been featured on Forbes, Fortune’s cover page along with Elon Musk and is also winner of National Business awards in the UK. Arun is a Guinness World Record Holder and has been felicitated as Global Indian of the Year (2021) by AsiaOne Magazine, featured on CNBC. He has also been awarded as Times Visionary Leaders by the Times of India Group, Times Ascent and Navbharat Times.

Recently, Arun announced his new venture ‘Global Odia Connect’, a digital platform to unite the Odia community of professionals across the globe and bring them under one domain.