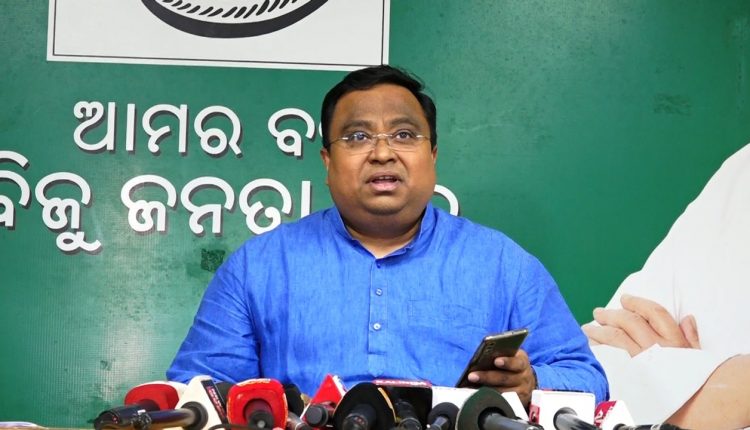 Bhubaneswar: Hitting back at Union Minister Dharmendra Pradhan for attacking the Odisha government, senior BJD leader Sasmit Patra on Tuesday accused BJP of cheating the farmers of the state.

Stating that BJP had promised to increase the MSP by 1.5 times in its 2014 election manifesto, the Rajya Sabha MP said the saffron party has failed to fulfill it during the last eight years.

Earlier in the day, Dharmendra had lashed out at the BJD government accusing it of misleading the farmers, particularly in Padampur in Bargarh district by telling them lies and making false promises.

Paatra in a statement alleged that though BJP had stated that it would double the income of the farmers, the Narendra Modi government at the centre cheated the farming community and did not do anything for them.

He said the BJP-led government had brought three anti-farmer farm laws in the Parliament which they had to withdraw after massive  protest and after more than 600 farmers had lost their lives during their agitation.

Along with BJD legislators and others, the BJP MLAs had supported the demand of fixing MSP of paddy at Rs.2930 per quintal in the Odisha Assembly resolution, but the saffron leaders are now silent, he said.

Stating that providing fertilisers in time and in right quantity is the responsibility of the Centre, Patra claimed that the BJP-led government is not providing adequate fertilisers to the farmers of Odisha.

The BJD leader said that lifting of surplus rice is the responsibility of the Centre but it has failed to lift the surplus rice and thereby affecting the farmers of the state.

Referring to crop insurance claims, Patra said only after Chief Minister Naveen Patnaik wrote to the Centre and the farmers launched an agitation, the BJP-led government finally agreed to do the needful.

When the BJD Government wanted to give Rs 200 crores of input subsidy to farmers, BJP told the poll body about model code of conduct in view of Padampur bypol, he said, adding because of this the input subsidy could not be released.

But it will be released immediately after the by-election and lifting of model code of conduct, Patra added.

Shradhha Murder: Aftab Hasn’t Confessed In Court, Says Lawyer; What Did He Say?