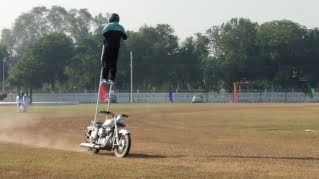 Jajpur: An Army man from Jajpur district has brought laurels to Odisha by setting a record for covering a distance of 128 km while standing on a ladder atop a moving motorcycle.

Sangram Keshari Jena, a 33-year-old Army havildar, returned to a hero’s welcome at his native village of Baribaliya after his record-breaking stunt.

Attached to the ‘Daredevils’ motorcycle display team of the Army’s Corps of Signals, Jena rode while standing on an 11-feet ladder with his back to the direction in which the motorcycle was moving. He completed the manoeuvre in four hours, 29 minutes and 45 seconds.

Jena created the record at the headquarters of 1 Signal Training Centre in Madhya Pradesh’s Jabalpur city on November 15. He broke the previous record made by BSF’s Avdesh Singh, who rode the bike for 68 km.

“I practiced for hours every day for a year and got injured on several occasions, but my family and the Daredevils team egged me on to attempt the stunt. They are the force behind this achievement,” Jena said after his return home.

His jubilant wife, Madhusmita Jena, said, “Everyone is happy about his achievement. I pray to God he that may he achieve more and do something more for the country.”